Standing still, Hyundai Motor’s Ioniq 5 is a gigantic battery, a cafe complete with table or a very compact living room with an extremely comfortable reclining sofa.

It's also a powerful electric car, although it isn't available for road testing just yet.

Hyundai unveiled the Ioniq 5 on Wednesday and Thursday in Seoul, giving local media a chance to do everything but drive the innovative new car.

Under Hyundai Motor’s new design concept Parametric Pixels, the square-shaped head and rear lamps definitely gave the model a whole new demeanor. Whether it's an attractive one or not will depend on the consumer's preference, but it sure does look futuristic.

The overall proportions, as the teaser photos showed, were wide and low with a relatively long wheelbase and short overhang. The widened wheelbase directly translates into a bigger interior space.

The spaciousness was helped by the absence of the transmission tunnel in the middle of the car, with all sorts of buttons and gear levers relocated to the front underneath the ventilation system or on the steering wheel.

That dividing bump that normally runs down the middle of the car was replaced with a moving console dubbed the Universal Island, which moves back and forth by manually pushing and pulling a handle underneath the console. If pushed back, there's suddenly so much space in the front row that it's possible to slide from the driver's seat to the passenger door.

As long as there is nobody in the backseat, the reclining front-row seat also show that Hyundai Motor doesn't just consider this Ioniq 5 as a means of transportation, but something more. 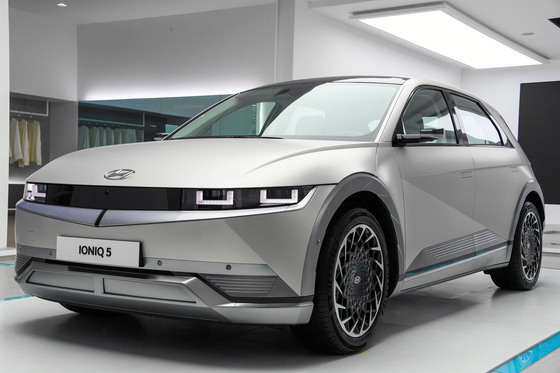 
Front seats can be leaned back to an almost 180-degree angle with a leg-rest pad popping out from underneath the seat at the push of a button. The ceiling of the vehicle was almost entirely covered with a glass window to emphasize the spaciousness of the interior.

As futuristic as it looks, the Ioniq 5 is not trying to be a luxury vehicle, and this is quite obvious as the texture of the leather seat doesn’t seem as smooth or luxurious as can be found in the Genesis lineup. Hyundai Motor says that it used all sorts of eco-friendly materials and processing methods to emphasize the model’s green initiative.

It used ground plastic bottles to make the material used on the back side of the Nappa leather seats, which also used vegetable oil in the manufacturing process. It's not entirely clear why Hyundai went to all that effort but still kept the animal-based leather, rather than using a more sustainable fake version like the Tesla Model 3. 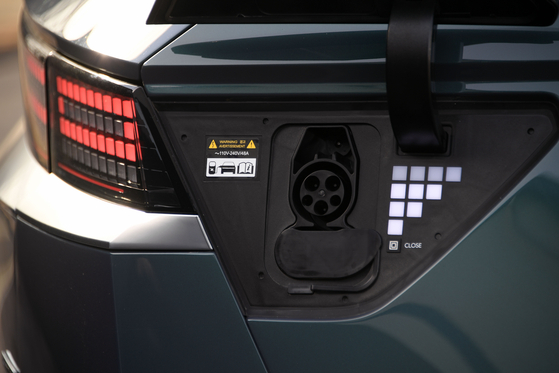 The exterior V2L socket on the Ioniq 5. [HYUNDAI MOTOR]


Function-wise, the Ioniq 5 is not only an energy-consuming machine but can also acts as a supplementary battery for other electronic devices.

Through the Vehicle-to-Load or V2L function, the car can provide enough electricity for a four-member family to live for four days. It could be especially handy when camping, allowing users to run a coffee machine, a heater or even hair dryer.

There are 10 square-shaped LEDs next to the V2L socket that act as an indicator of how much power the car has left for charging other devices.

The V2L function is also available through a 220-volt socket placed underneath the second-row seat, but this one will only be activated when the engine is on.

The Ioniq 5 is already proving popular both in Korea and Europe, two of the model's initial markets. 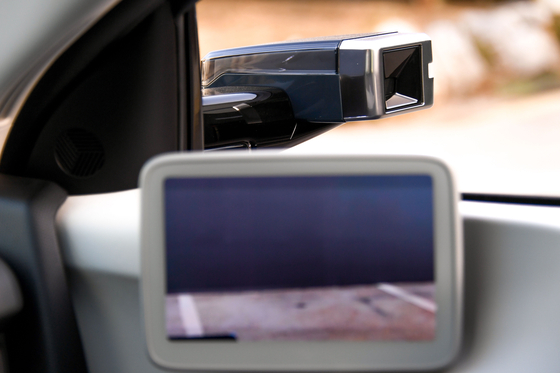 Digital side mirrors on the Ioniq 5. [HYUNDAI MOTOR]


In Korea, more than 23,000 cars were reserved on the day reservations opened. In Europe, the limited 3,000 vehicle initial release was oversubscribed by nearly three times on the first day, the company said. 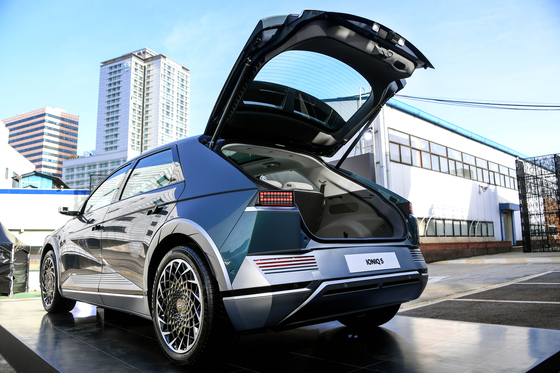 The backside of the Ioniq 5. [HYUNDAI MOTOR]