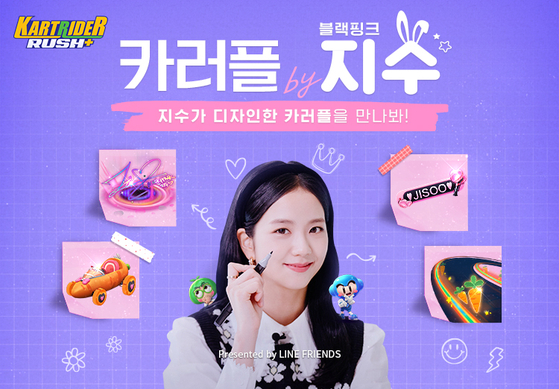 Ten items were jointly created by the game's publisher Nexon, Naver's character franchise Line Friends and Jisoo. Sales of the first batch started on the Kart Rider mobile game. The rest of the items will be unveiled one by one until April 10.

"As an avid fan of Kart Rider, Jisoo took part in the project with affection and passion," said Jisoo's agency YG Entertainment.

She drew out the ideas for new items and characters of the game, which were mainly based on herself and her pet dog.

In addition to the items developed by Jisoo, Nexon also released four game items that can be collected by joining in various events available within the game or taking part in multiple games to gain "carrot keys" that will unlock the items.

Line Friends YouTube channel has been uploading videos of Jisoo working on the items and taking part in the project for the past two weeks.