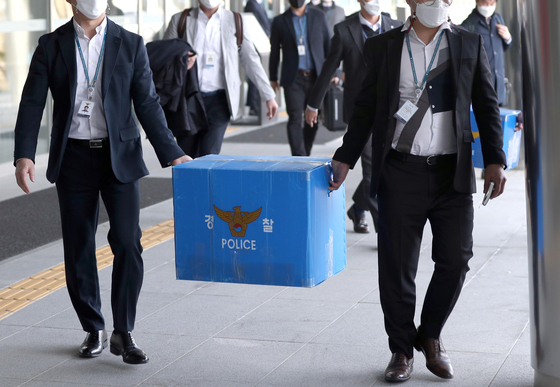 Police carrying out boxes of seized documents and files from Land and Housing Corp.'s headquarters in Jinju, South Gyeongsang on March 17 as part of its investigation on LH employees using insider information in purchasing properties. [YONHAP]


The Moon Jae-in administration wants to crack down hard on the inside information land-buying scandal, a government official said, and if a single employee at Land and Housing Corp. (LH) is found to be guilty, no bonuses will be paid to LH workers.

The LH controversy has become a major threat to the ruling Democratic Party’s chances in the upcoming Seoul mayoral by-election and the government is working hard at damage control.

While the “LH situation” was the result of personal misconduct by individuals, said the government official, who requested anonymity, the government is thinking of ways to make institutions more responsible.

“As such we are looking at ways of improving the evaluation system in public institutions,” the official said.

Performance evaluations will be affected, he said, which play a significant role in salary raises, bonuses and overall budgets.

The budget for LH this year was nearly 4 trillion won ($3.5 billion), which was 905 trillion won or 30 percent more than in 2020, according to the National Assembly Budget Office.

LH's budget is the sixth biggest among public companies this year. The National Pension Service has the highest at 30 trillion won.

Last year. LH received the highest grade -- an A -- in the government’s annual evaluation, which covers a range of issues including managing budgets, efficiency, creating jobs, creating equal opportunities, and cooperation with small businesses and local economies etc.

A public organization that receives a yearly evaluation below grade C loses bonuses for all of its workers that year, and the head of the organization could lose his or her job.

The inside information real estate scandal could cost LH this year in its yearly evaluation.

LH employees could even have to return bonuses  they received in 2020 for their performances in 2019.

During a meeting with lawmakers on the National Assembly’s Strategy and Finance Committee on March 18, Finance Minister Hong Nam-ki said the government in taking the LH situation as an opportunity to review the public institutions’ performance evaluation system.