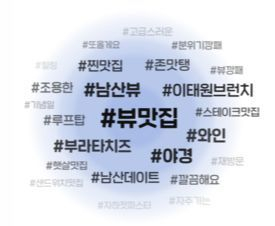 Naver will eliminate restaurant and cafe reviews based on stars, and instead show hashtags related to eateries using artificial intelligence. [NAVER]

As the food delivery market grows rapidly on the back of the coronavirus pandemic, conflict is growing between restaurant operators and consumers using delivery apps.

Delivery apps work on a rating system where customers leave a review, generally with a rating out of five stars, after receiving their order. The issue comes if customers give a low score in an intentional attempt to damage a restaurant's business or restaurant operators make the mistake of responding to unjust reviews.

The owner of a cafe in Yeongdeungpo District, western Seoul, had to apologize to users after becoming the target of a spate of reviewers intentionally trying to lower the cafe's rating.

The issue began when a customer left a review saying the food was "disappointing." In response, the owner asked customers to please make sure they "thoroughly read the menu" before placing an order.

As the argument grew, other reviewers decided they didn't like the way the owner was treating a customer and began to deliberately post bad reviews to damage the business.

The attack worked and the owner eventually had to post a letter of apology to try and stay in business.

Fake reviews are also a problem.


“We spotted 25,000 fake reviews in August and September last year, during our concentrated monitoring season,” a spokesperson from Baedal Minjok, the largest delivery app in Korea, said.

In March last year Baedal Minjok even had to sue an organization that had been uploading fake reviews after being paid by competing restaurants.

Lee said that platform operators need to more actively mediate conflict, such as by expanding their consumer complaints centers.

Delivery app operators are struggling to come up with a solution. The country’s largest delivery app operators Baedal Minjok and Yogiyo are operating a dedicated team to monitor the review section and are educating restaurant owners on how to manage reviews and deal with customer complaints.

Some changes have already been implemented.

Baedal Minjok in July last year shortened the period during which users can upload reviews after ordering from seven days to three days. The app operator also prohibited same users from rewriting reviews on the same order.

Naver doesn’t operate a delivery app, but recently decided to get rid of a star-based restaurant scoring system on the portal site considering the huge damage it could cause to small restaurants and cafes.

Korea’s delivery app market grew from a 7 trillion won ($6.2 billion) market in 2019 to 11.6 trillion won last year, according to a research report by Hyundai Motor Securities. The number of monthly users of delivery apps increased from 870,000 people in 2013 to 27 million people as of August last year.

As the number of users grow, complaints grow too.

According to the Korea Consumer Agency, the number of complaints registered at customer call centers increased from 23 cases in January last year, before the Covid-19 pandemic, to 58 cases in December.