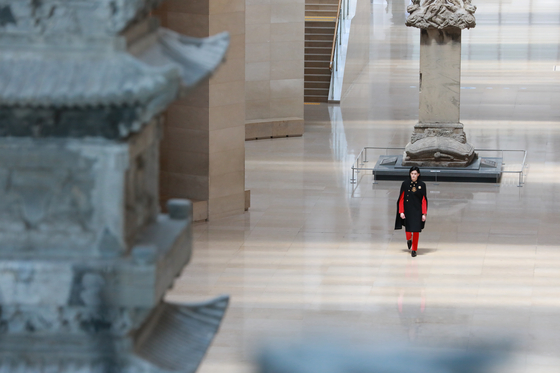 A model for brand Caruso (designer Chung Kwang-hyo) walks along "The Path to History" at the National Museum of Korea in central Seoul. [SEOUL METROPOLITAN GOVERNMENT]


As the clock strikes 6 p.m., which usually signals closing time at the National Museum of Korea, things have been coming to life.

No, it’s not the sequel to the 2006 fantasy-comedy flick “Night at the Museum,” but the shooting of the 2021 Fall/Winter Seoul Fashion Week, which kicks off virtually on Monday.

The state-run museum has opened its doors to the the fashion world for the first time to provide runways for models dressed in the styles set to be in vogue this fall and winter. It hasn’t just been setting up temporary marquees outside the museum or in its lobby. The models, representing 12 Korean brands were allowed to walk catwalks in a more intimate setting inside exhibition halls, even in the Buddhist Sculpture Gallery exhibiting the famous Maitreya in meditation (National Treasure No. 83).

“This section of the museum is an ‘off limits’ zone for photographers,” said an official from the museum. “Only those authorized to take photographs of the Maitreya in medication can do so under strict guidance.” 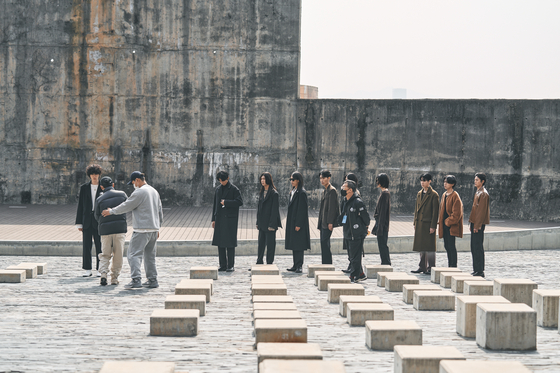 
With no sign of the coronavirus coming to an end, the Seoul Metropolitan Government, which has taken over the biannual fashion event from the Seoul Design Foundation, decided to give it a historical twist and leave the Dongdaemun Design Plaza behind, which has been the main venue for Seoul Fashion Week since 2014.

“It was not an easy job to persuade the National Museum of Korea to allow models do a catwalk inside the museum and shoot a digital runway, which requires dozens of cameramen and heavy shooting equipment to come in as well,” said Kim Yeon-eui, an official from the Seoul Metropolitan Government’s Urban Manufacturing Clusters Division, who manages the upcoming event. 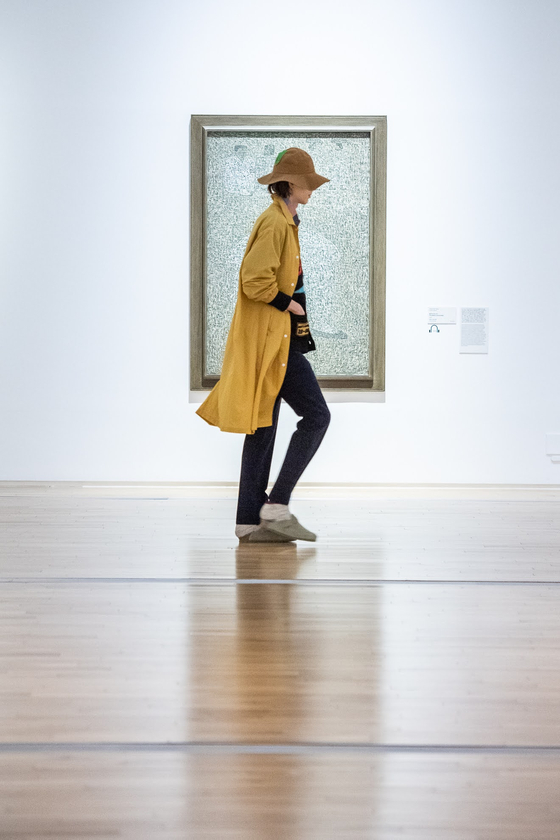 A model for designer Ko Tae-yong's Beyond Closet walks in the National Museum of Modern and Contemporary Art in central Seoul on March 15. [SEOUL METROPOLITAN GOVERNMENT]


According to the Seoul city government, 12 brands were assigned to shoot their upcoming digital runways in the National Museum of Korea, five brands shot theirs at the MMCA and nine brands shot theirs at the Oil Tank Culture Park in Sangam-dong, western Seoul. Seventeen rising new designers also got to shoot their shows in diverse areas including the Han River Park in Gwangnaru, eastern Seoul, and Seonyudo Park in Yeongdeungpo District, western Seoul.

“We told the designers to submit their first and second venue preferences and allocated them by taking many things into consideration such as their design concept as well as time and space restraints,” said Kim. “At the National Museum of Korea, we could shoot for a week for about four to five hours before the opening and after closing, but we could only shoot on one Monday at the MMCA when it’s closed. Everyone seemed happy with where they’ve ended up.”

It may seem like there could have been a fierce battle between the designers to take the gallery where the Maitreya in medication sits. But according to Kim, designer Chung Kwang-hyo of Caruso was the perfect fit as his Fall/Winter collection’s concept is “coincidently the Maitreya in meditation.”

“Even before we revealed the venues for the upcoming fashion week, Chung said the concept for his new collection is the Maitreya in medication,” said Kim. “I heard he even has one as part of his collection. Nobody really objected to Chung taking the spot.” 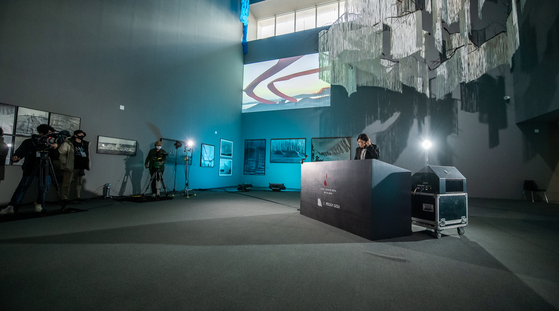 Berlin-based Korean DJ Peggy Gou performs during the shoot of the closing event for the 2021 Fall/Winter Fashion Week at the National Museum of Modern and Contemporary Art. [SEOUL METROPOLITAN GOVERNMENT]


In fact, the most popular spot was “The Path to History,” which is the main alleyway on the first floor leading to the Ten-Story Stone Pagoda from Gyeongcheon Temple Site. That’s because internationally famous K-pop boy band BTS filmed a performance there last June.

“I think most of the designers shot one or two scenes in The Path to History,” said Lee Hyun-ju, a public relations director at the museum. “We didn’t have to limit the brands that wanted to shoot there as long as they filmed one at a time because it’s more spacious unlike inside the galleries that are full of artifacts inside glass cases.”

Song Hyun-hee and her husband Choi Kyoung-ho, the designers behind street fashion brand Holy Number 7 said the news that this year's Fall/Winter Seoul Fashion Week would be online was a major disappointment to local designers, who are desperate to bring back the extravaganza of live shows that garner thousands of fashion enthusiasts and celebrities who show up dressed to impress.

“I miss the scenes of fashionistas around Dongdaemun Design Plaza,” said Song. “It’s like a ritual now and witnessing so many people enjoying it really cheers up the designers.”

But Choi said filming the digital shows at the museum for the upcoming season really thrilled designers “because it’s absolutely impossible for individual designers to liaise such a significant venue that houses so many important treasures and shoot their collections there.”

“We are so honored to work with the professional filming team organized by the Seoul Metropolitan Government,” said Choi. “We can’t wait to see the final outcome. It’ll be really different.”

Holy Number 7 got to shoot their collection at the Buddhist Painting Gallery and also various spots outside the museum.

“In fact, Holy Number 7 is a Christian brand that uses the Bible verses as our key concept,” said Choi. “Most of the brand’s outfits bear the key Bible verse of the season so we were quite taken aback when we found out that we’ll be shooting at the Buddhist Painting Gallery.”

But the designers said they were more than relieved after talking to the filming team and the director, who reassured them that “such religious concept and messages of good influence will be highlighted rather than clash inside the gallery.”

The National Museum of Korea is not the first one to generously open its doors for a fashion event. The Victoria and Albert (V&A) Museum in London held large-scale runway presentations during London Fashion Week and the Louvre in Paris has also been authorizing luxury fashion house Louis Vuitton to hold shows inside the museum since 2017. But according to Kim from the Seoul Metropolitan Government, the National Museum of Korea is the first that has authorized a large crane camera to come inside and allow drones to fly over the museum, as far as she’s concerned. 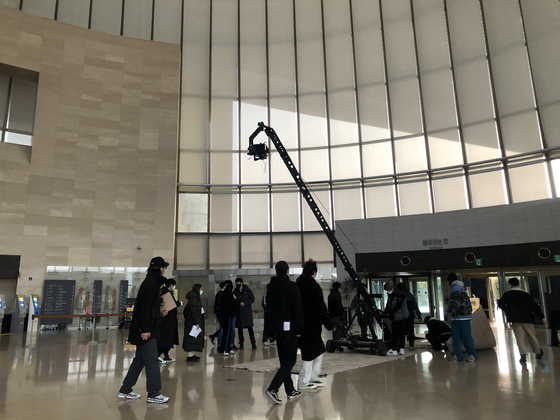 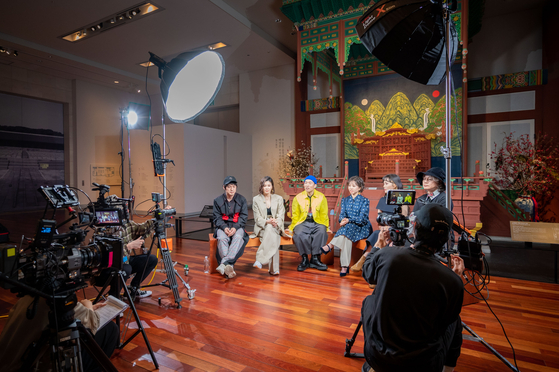 The band Leenalchi dressed in different designers' latest collections, sits down for an interview at the National Museum of Korea behind a backdrop featuring ilwolobongdo, the famous depiction of the sun, moon and five peaks that symbolize power and eternity, which was placed behind the king’s thrones of the Joseon Dynasty (1392-1910). [SEOUL METROPOLITAN GOVERNMENT]


Tension filled the air on March 9 as a large crane camera was carefully rolled in, inch by inch so as not to scratch the museum’s expensive marble floor tiles, to shoot the opening show featuring popular band Leenalchi.

Museum officials and researchers were assigned to different exhibition halls for the whole week of the shooting so that no accidents happen.

“We understand the museum’s concern,” said Kim from the Seoul Metropolitan Government. “It’s a state-run museum that houses priceless relics and Korea’s cultural heritages. We also didn’t want to cause any trouble when all of this was organized to benefit both the local designers and the state-run facilities.”

Leenalchi’s performance airs at 8 p.m. today for about an hour.

Kim Eui-seung an official from the Seoul Metropolitan Government said “this brave attempt has been made to promote Korea’s culture and tourism along with the country’s trendy fashion.” 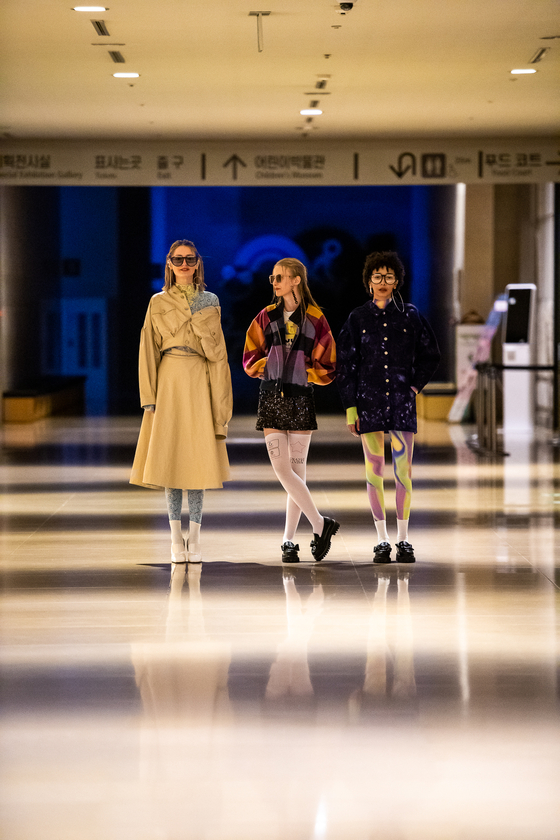 
Choi of Holy Number 7 also said that most of the designers who filmed inside the museum and the MMCA were on the same page as the venues.

“We wanted to take this as an opportunity to co-exist and survive together,” said Choi. “What concerned us, however, was unintentionally degrading the image of important artifacts and artworks by featuring them in an inappropriate way in our films. We hope everyone’s films turn out great so that they not only highlight the brands’ collections but also Korea’s cultural artifacts and modern artworks of great Korean artists.”

The schedule for the 2021 Fall/Winter Seoul Fashion Week is available at www.seoulfashionweek.org.