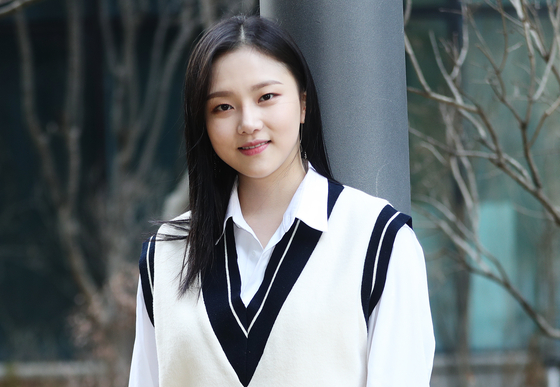 
Actor Jung Da-eun of recently ended tvN drama “L.U.C.A.: The Beginning” has been focused on question recently: What her next move will be to bring her one step closer to her dream of becoming an actor. Jung originally debuted as a member of girl group 2Eyes in 2013, but she has found a bigger passion in acting.

“All I can think about these days is what other works I will take part in,” said Jung during an interview with the Ilgan Sports, an affiliate of the Korea JoongAng Daily.

She played a character named Yuna, who accidentally kills five people during a training to become a member of a special forces team for the government. Right before tvN’s “L.U.C.A.: The Beginning” went on air, Jung starred in JTBC’s “Mystic Pop-up Bar,” proving her prowess with action scenes. Although tvN’s show was aired this year, the filming was all finished by last September.

“I was anxiously waiting and anticipating to see the final version that aired after I was all done with filming,” said Jung. “I watched each episode whenever it was on air, and the time seemed to fly so fast during the period the show was on.”

The rookie actor continued sharing more about her experiences in the two dramas and what she wants to happen for her in the future. Below are edited excerpts.

Q. What made you take on two works, back to back?
A. I thought I had to do this. Until about two years ago, I was waiting for roles while doing some other part time jobs and kept thinking about when I would be able to work. As soon as I started with one, I was dreading the thought of not being able to book another gig. That really scared me. So the idea of something happening right away really made me happy. I always feel sad when the work is over, as that’s when I usually feel like I understand what the drama is all about.

Was it difficult to do action scenes?
I usually always enjoy doing action scenes and I don’t find them difficult. One thing that was tough while filming “L.U.C.A.: The Beginning” was filming the action scene in the elevator. Since the space itself was tight, it was tough to coordinate. But these kind of new challenges make me more excited.

Are you happy with the ending?
My character died in the ninth episode. I intentionally didn’t get the script for the episodes that came afterward. I’m just sad my character can never be in a sequel, if there’s ever a sequel made.

How do you think “L.U.C.A.: The Beginning” will be remembered?
I think the drama will always be remembered as the start of my new beginning. Even in five years or 10 years time, when I think about this drama, I will recall it as the work that I did with the greatest senior actors.

You have done romance and action series more recently. Which fits more to your style?
I’m usually very shy, so I’m bad at approaching someone first. My partner in “Mystic Pop-up Bar” seemed to have a similar personality, and it was awkward until the end of the drama. But that actually helped me a lot to act as we were supposed to face awkward situations for much of the time. So in a way, it was very relaxing and comfortable to just be in an action piece, fighting and punching others.

You debuted as a member of girl group 2Eyes. Do you have any regrets about not doing more as a singer?
In fact, when I was preparing to become a singer and was working as a singer, I did have a big dream about singing. But at the end of our rounds of performance, I found myself very exhausted. When I was really confused with [what I should do,] acting is what really inspired me and made me passionate. Acting made me want more to happen. I really want to focus my everything on getting my acting right. Of course my experience as a singer really helped me be able to do more now.

Is there a particular genre of acting or a role you want to try?
I was more in charge of vocals in the group when I worked as a singer. Since I have that experience, maybe I can bring that background into acting. If I ever get a chance, I want to do something that is related to music, or a musical film. I also want to do a melodrama that makes my heart ache, and I of course want to do more action scenes.

What are the things you want to do this year?
This year I said hi with the character Yuna, and I want to be able to say hi to the home audience again with a different role. I wish I could do another action genre so that I can build myself up as a rookie that really does action scenes well. Later on, I want to be called an action specialist whom the audience trust and watch all the works I’m in.

How do you think your 30s will be after spending most of your 20s in the entertainment scene?
When I was in my early 20s, people in their 30s looked so stable. I want to be someone those you have less experience than I do can look up to. I want to be someone who can show very steady performances. And I want to know how to control and manage myself.