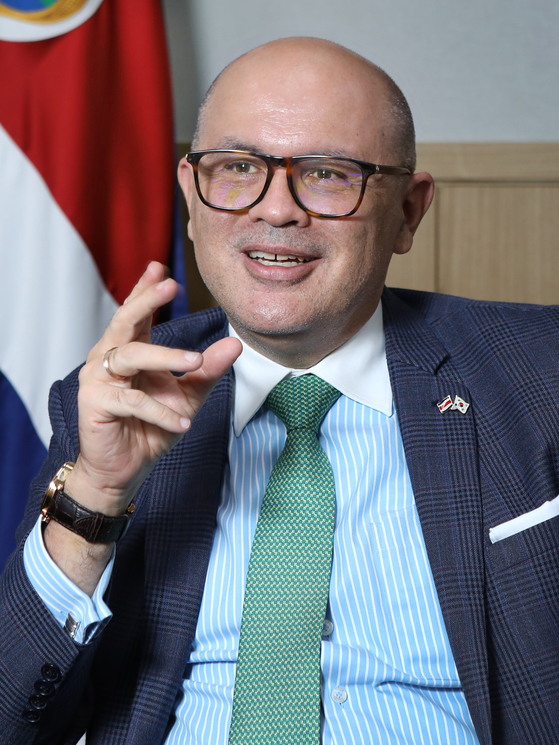 Rodolfo Solano Quiros, Costa Rican minister of foreign affairs and worship, speaks with the Korea JoongAng Daily at the Embassy of Costa Rica in Seoul on Wednesday. [PARK SANG-MOON]


The president of Costa Rica had good reasons for saying the nation must aspire to be known as the “Korea of South America,” said Rodolfo Solano Quirós, Costa Rica's minister of foreign affairs and worship, on Wednesday.

“That was a comment that President Carlos Alvarado Queseda made in his speech last year, and I really appreciated President Moon Jae-in for bringing it up during our meeting in Korea,” said Quirós, speaking at the Costa Rican Embassy in Seoul during his weeklong visit to Korea to attend the Korea-Latin America and the Caribbean forum on digital cooperation.

“Costa Rica wants to be a country in the region that focuses on education, on the well-being and happiness of the people and, most importantly, on building and making available the facilities and institutions that would improve the livelihood of our people,” the minister added. “And these are areas where Korea has been exemplary.”

The minister during his visit last week met with President Moon, his counterpart Foreign Minister Chung Eui-yong, and speaker of the National Assembly Park Byeong-seug. He also met with members of the Seoul city government, Green Climate Fund and Global Green Growth Institute.

Despite the Covid-19 pandemic stalling diplomatic activities across nations since last year, Costa Rica has welcomed some auspicious standings in its global standings. The nation became the Organisation for Economic Cooperation and Development (OECD)’s 38th member last year. This year, it is chairing SICA (Central American Integration System) until June as well as the Economic Commission for Latin America and the Caribbean until 2022.

“I remember that when Korea became an OECD nation [in 1996], there were exciting and interesting conversations across the country, in building up the nation and its infrastructures, among the business circles and the scholarly communities,” Quirós said. “Every country at some point passes through this period, and I believe Costa Rica is going through one right now. Taking into account Korea’s experience is going to be very helpful in that sense.”

Minister Quirós has spent over a decade in Korea, as Costa Rica’s minister counselor and consul general to Korea from 2002 to 2010, and as the ambassador from 2015 to 2019. He was also in the nation as a student in the late 1990s.

It was no coincidence that the Foreign Ministry selected Korea as the destination of the minister’s first overseas trip since his inauguration last year. The pandemic had placed many restrictions on such diplomatic excursions, but it is also providing more room for cooperation, the minister emphasized.

“The two nations have a common language when it comes to recovery following the pandemic,” Quirós said. “Korea has a new deal proposal with three pillars: Digital, green and local. Costa Rica also has a decarbonization plan which has three pillars: Decarbonization, digitalization and decentralization. So we are in an ideal place to collaborate on this area for a win-win result.”

Costa Rica's green policies have received media attention before, including when it doubled the forested surface of the country in some 30 years’ time, making the nation the first tropical country to have reversed deforestation.

The bilateral cooperation on green recovery will also be part of the discussions at the virtual summit planned between President Moon and President Alvarado at the Partnering for Green Growth and the Global Goals 2030 (P4G) climate summit in Seoul.

If the pandemic situation improves, President Alvarado may be able to visit Korea in person in October, according to the minister.

“This is an exciting year for Costa Rica, as it celebrates its 200th anniversary of independence this year, and looks forward to commemorating the 60th anniversary of diplomatic ties with Korea next year,” Quirós said.

Korea and Costa Rica established diplomatic ties in 1962. The trade volume between the two nations reached around $344 million as of 2019, according to Korea’s Ministry of Foreign Affairs, with major Korean exports to Costa Rica being automobile and automobile parts, and major exports from Costa Rica to Korea consisting of coffee and medical devices. The two have signed and ratified their FTA, as part of the Korea-Central America FTA, in 2019.

Your prime minister, my president