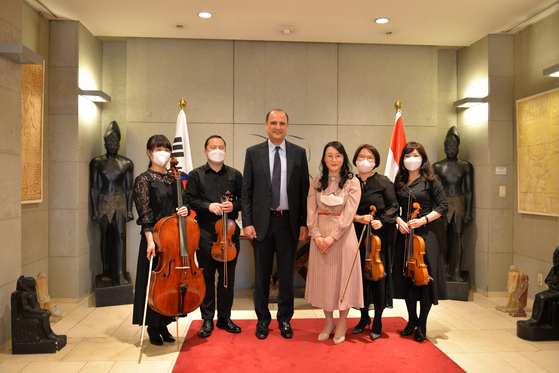 Kang Ju-hyun, author of ″The hidden tales in a papyrus bundle,″ third from right, and Egyptian Ambassador to Korea Hazem Fahmy, third from left, celebrate the publication of Kang's five-book series at the embassy in Seoul on Friday. The series is an illustrated edition about ancient Egyptian tales passed down from unknown Egyptian authors, dating from 2,050 B.C. to 600 B.C., with the stories translated directly to Korean from the original script in hieroglyphs and edited by Kang. Kang has also done all the illustrations in the series that reflect original Egyptian art and symbolism, according to the embassy. [EMBASSY OF EGYPT IN KOREA]