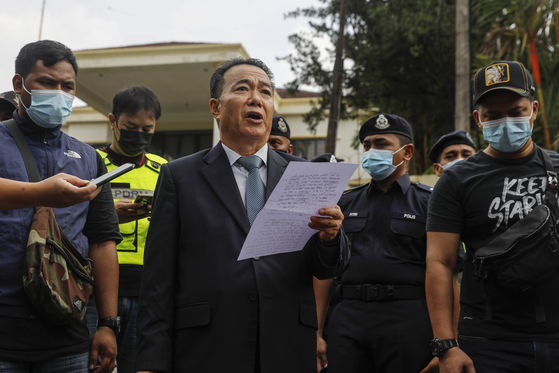 Kim Yu-song, charge d'affaires at the North Korean Embassy in Kuala Lumpur, speaks to journalists before departing Malaysia, Sunday. North Korea said it will sever ties with Malaysia amid a diplomatic row between the two countries over the extradition of a North Korean citizen to the United States accused of money laundering. [EPA/YONHAP]


North Korean diplomats left Malaysia Sunday, two days after Pyongyang decided to sever diplomatic ties with the Southeast Asian country over the extradition of a North Korean citizen to the United States on money laundering charges.

The Malaysian government Friday issued an order for all diplomatic staff at the North Korean embassy in Kuala Lumpur and their family members to leave the country within 48 hours in a response to Pyongyang’s decision.

Local media reported that a bus carrying over 30 people, including North Korean diplomats, staff and their family members, departed from the shuttered embassy for the Kuala Lumpur airport at about 11 a.m. Sunday.

Shortly ahead of departure, Kim Yu-song, the North Korean charge d'affaires, read a statement saying that Malaysia had "committed an unpardonable crime” and accused the country of being a part of a U.S. conspiracy aimed at "isolating and suffocating" Pyongyang.

“With regard to the grave situation that has prevailed, the Ministry of Foreign Affairs of the DPRK hereby announces total severance of the diplomatic relations with Malaysia," Kim said, "which committed a super large, hostile act against the DPRK, in subservience to the U.S. pressure.” He referred to the acronym for the North’s official name, the Democratic People’s Republic of Korea.

“The Malaysian authority will bear full responsibility for all the consequences,” he continued, accusing Malaysia of “destroying the foundations of the bilateral relations based on respect of sovereignty” through its decision to extradite the North Korean national.

Malaysia’s top court last week okayed the extradition to the United States of Mun Chol-myong, a North Korean businessman accused of transporting prohibited luxury items from Singapore to Pyongyang and laundering funds through shell companies in violation of United Nations sanctions. This was the first time a North Korean national was extradited to the United States to stand criminal trial.

In a scathing statement carried in the state-run Korean Central News Agency (KCNA) Friday, the North Korean Foreign Ministry called the extradition “an unpardonable crime” that “forcibly” delivers an “innocent citizen of the DPRK to the United States."

The ministry claimed that Mun “was engaged for years in the legitimate external trade activities in Singapore,” and called the illegal money laundering accusations an “absurd fabrication.”

It claimed Malaysian legal authorities attended a “drinking party arranged by the U.S. Ambassador in Malaysia shortly after the incident” and had been promised “that they would receive huge gratuities.”

It went onto accuse Malaysia of “direct engagement in the anti-DPRK hostile maneuvers of the United States which seeks to deprive our state of its sovereignty and rights to existence and development” and announced it will cut off diplomatic ties with the Southeast Asian country.

In a statement late Friday, the Malaysian Foreign Ministry denounced North Korea's decision as “unfriendly and unconstructive, disrespecting the spirit of mutual respect and good neighborly relations among members of the international community.”

It added that the Malaysian government “will issue an order for all the diplomatic staff and their dependents at the Embassy of the DPRK in Kuala Lumpur to leave Malaysia within 48 hours from today.”

The ministry said it would close the Malaysian embassy in Pyongyang, operations of which had been suspended since 2017.

U.S. authorities want Mun to face criminal charges over accusations he laundered money on behalf of North Korea. Mun was detained by Malaysian authorities on May 14, 2019, over allegations of money laundering and violating UN sanctions.

Mun has lived with his family in Malaysia for the past decade and has denied the accusations, calling them “politically motivated.”

Photographs Sunday showed its flag had been lowered overnight and the gates were open as local and foreign media crowded around the diplomatic mission. Health officials were later spotted entering the mission, likely swabbing the officials for Covid-19 tests.

Shortly after, Kim Yu-song appeared to read his statement. Then the embassy was shuttered and the diplomats boarded the bus and departed for the airport.

Malaysia and North Korea’s diplomatic ties, which date back to 1973, have been strained since North Korean leader Kim Jong-un’s estranged half brother Kim Jong-nam was killed at Kuala Lumpur International Airport in February 2017 after two women allegedly hired by North Korean agents smeared his face with the VX nerve agent. Pyongyang denied involvement.

Malaysia suspended operations at its embassy in Pyongyang following the incident. Likewise, Kang Chol, North Korea’s former ambassador to Malaysia, was expelled from Kuala Lumpur in 2017 over controversial remarks on the murder of Kim Jong-nam, and Kim Yu-song has helmed the embassy since.

Malaysia’s Foreign Ministry in its statement Friday noted it has always considered North Korea a “close partner” since the establishment of the diplomatic relations and “had been persistent in pursuing concrete efforts to strengthen our relations with the DPRK” even after the assassination of Kim Jong-nam.

Choe Ryong-hae, the nominal No. 2 figure in the North Korean regime, met with Malaysian Prime Minister Mahathir Mohamad in October 2019 in Azerbaijan and discussed ways to normalize relations, but little progress was made.

The moves came after high-level U.S. and Chinese officials held their first talks since the launch of the Joe Biden administration in Alaska. U.S. Secretary of State Antony Blinken and U.S. National Security Adviser Jake Sullivan met Thursday in Anchorage with Yang Jiechi, director of China’s Office of the Central Commission for Foreign Affairs, and Wang Yi, the Chinese foreign minister and state councilor.

Blinken said afterward that he had a “candid conversation” with the Chinese officials on issues including North Korea. Blinken and U.S. Defense Secretary Lloyd Austin last week made joint visits to Seoul and Tokyo and gathered allies’ opinions on the North Korea issue as the Biden administration is set to complete a review of its Pyongyang policy in the next few weeks.