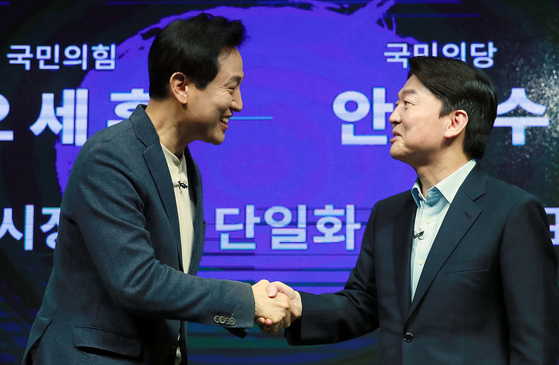 Oh Se-hoon and Ahn Cheol-soo shake hands on March 15 at a television studio in Yeongdeungpo District, Seoul after announcing their intent to support a single candidate in the Seoul mayoral by-election. [NEWS1]


The two opposition frontrunners in next month's Seoul mayoral by-election reached agreement Sunday on the terms of a public opinion survey that will decide which of them will run.

During talks at the National Assembly, representatives of Oh Se-hoon of the main opposition People Power Party (PPP) and Ahn Cheol-soo of the People’s Party (PP) ironed out the phrasing of the survey, following earlier agreements between the two sides to have two pollsters each conduct a survey of 1,600 mobile phone users and ask questions about the candidates' suitability and competitiveness.

The survey will take place between Monday and Tuesday of this week, and the final candidate will be announced by Wednesday at the latest. Should the targeted number of individuals be polled within a day, the candidate may be announced Tuesday.

Oh, who was mayor of Seoul until he resigned over a referendum on free school meals, and Ahn, a former software mogul-turned-politician, have agreed to support a single candidate to improve the conservative bloc's chances against Park Young-sun, the ruling Democratic Party’s (DP) candidate in the by-election.

As conservatives’ concerns grew over the slow pace of choosing a candidate, opposition politicians in recent days have urged greater speed.

“Candidates Oh Se-hoon and Ahn Cheol-soo must not obsess over small differences and unify their candidacy as soon as possible in order to bring about a change of government,” said Park Hyung-jun, the PPP’s candidate in the Busan mayoral by-election, on Saturday.

The mayoral seats of both Seoul and Busan were both vacated last year as a result of sexual harrassment allegations against their incumbents.

The agreement on the surveys came after a long back-and-forth between the PPP and the PP.

Oh urged Ahn to join forces with the PPP in January, offering to stand down as mayoral candidate if Ahn merged his minor party with the PPP.

Last Tuesday, just hours before the first televised debate against Oh, Ahn made a surprise counter-proposal to merge his minor party with the main opposition party if he wins the April by-election.

Oh’s camp said the offer to merge parties came too late to be considered credible.

In a Realmeter poll commissioned by the Munhwa Ilbo, conducted on March 13 and 14 and announced last Monday, Oh was ranked the frontrunner if the opposition failed to field a single candidate and both Ahn and Oh run against Park in a three-way race.

According to the poll, Oh would score 35.6 percent, Park 33.3 percent and Ahn 25.1 percent if all three run. It was the first survey in which Oh was frontrunner in a three-way race.

If Oh runs against Park in a two-way race, he would score 54.5 percent and Park 37.4 percent, the poll showed.

If Ahn runs against Park in a two-way race, he would score 55.3 percent and Park 37.8 percent, the poll said.

When asked which candidate they support as a consolidated opposition contender, Oh was backed by 39.3 percent and Ahn 32.8 percent.