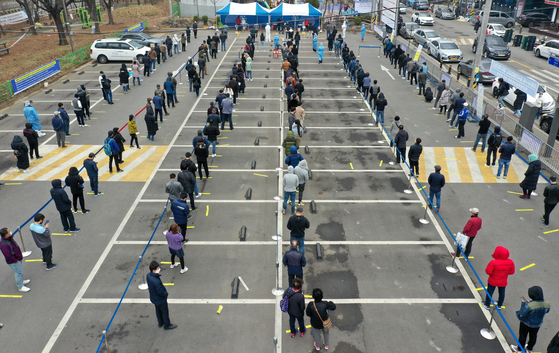 People line up for Covid-19 tests at a testing site in Danwon District in Ansan, Gyeonggi, amid backlash over the local government's administrative order for all foreign workers in the province to get tested. [NEWS1]


Workers at bathhouses nationwide will be required to get Covid-19 tests starting Monday, health authorities announced Sunday, in response to a high number of infections linked to saunas recently.

The Central Disaster and Safety Countermeasure Headquarters said that special measures will be implemented on saunas requiring bathhouse workers, including scrubbers, barbers, aestheticians and clerks, to get polymerase chain reaction (PCR) tests.

The authorities will also require mandatory temperature checks and QR code scans for customers who use the saunas. Health officials recommend sauna customers refrain from chatting with other people and from staying in the sauna any longer than an hour. Saunas will be required to keep customers at least 8 square meters (86 square feet) apart. It will also require saunas to halt issuing monthly passes which allow customers to frequent the facilities unlimitedly. Customers are recommended to keep their masks on and avoid eating.

From last October to March 15, more than 1,200 Covid-19 cases were traced to 43 bathhouses nationwide, according to health authorities. People who visit saunas tend to remain in unventilated areas for an extended period of time, making them more prone to be exposed to the virus.

A recent cluster of infections linked to a sauna in Jinju, South Gyeongsang, has recorded 198 cases as of Friday.

Local governments conducted inspections on 3,486 bathing facilities nationwide from Feb. 10 to 23 and fined six bathhouses. Another 310 bathhouses were recommended to improve quarantine measures.

The government will conduct additional inspections this week. 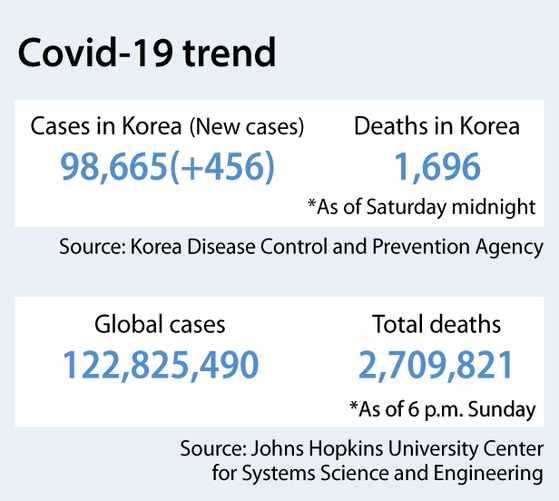 This was up from 452 cases the previous day, despite the usually lower testing rates over weekends, as people are more active amid the warming spring weather.

There were 19 new imported cases, including five from the Philippines.

Of the new local infections, 124 cases were in Seoul, 155 in Gyeonggi and 20 in Incheon. Cases were reported at work places, fitness facilities, hospitals and funeral parlors.

Korea will begin administration Tuesday of AstraZeneca vaccines to more than 376,000 patients and health care workers at nursing homes and other high-risk facilities who are 65 or older, said the KDCA Sunday, despite continued concerns over the safety of the drug. They are expected to get their second shots starting the first week of June.

Prime Minister Chung Sye-kyun said in a Covid-19 meeting Sunday, “We confirmed again that there is no issue with the safety of the vaccine,” addressing concerns of AstraZeneca vaccines being linked to blood clots.

He said that a panel of experts Saturday reviewed the results of overseas studies and domestic cases and noted that the European Medicines Agency (EMA) stated that there was no proven scientific link between the vaccines and forming of blood clots, and that the World Health Organization also recommended to continue administering of the shots.

European countries last week temporarily suspended the rollout of the AstraZeneca vaccines over concerns of blood clots forming as a side effect.

Some of the countries including Germany, France and Italy resumed vaccination with AstraZeneca’s shot Friday, with an added warning that it could be linked to blood clotting, as the EU health regulator EMA said that the benefits of vaccination in preventing Covid-19 hospitalizations and deaths outweigh the risks of side effects.