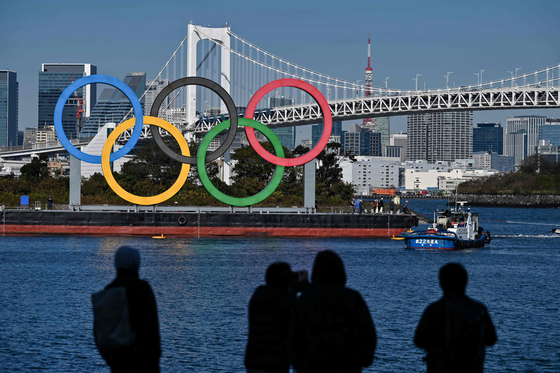 Overseas fans will be banned from this summer's pandemic-delayed Tokyo Olympics, organizers said on Saturday, in a bid to reduce the risk of spreading the virus and ease the Japanese public's anxieties. [AFP/YONHAP]


The Tokyo Olympic Committee has decided to ban overseas spectators for this year's summer Olympics, and the 630,000 tickets purchased by overseas residents will be refunded.

The decision was made following five-way talks on Saturday night attended by Tokyo 2020 Organising Committee President Seiko Hashimoto and the head of the International Olympic Committee Thomas Bach, according to Japan's public broadcaster NHK.

The decision is believed to have been made to calm the Japanese public's anxiety over hosting the Tokyo Olympics, as the coronavirus outbreak, and its variations, is still wreaking havoc around the world. The Japanese government is still not allowing foreigners to enter the country.

The Olympics have already been delayed from their planned 2020 date due to the pandemic. The Tokyo Olympics are currently scheduled to run from July 23 through Aug. 8, and the Paralympics from Aug. 24 to Sep. 5.

Some 600,000 Olympic tickets purchased by overseas residents will be refunded, as will another 300,000 Paralympic tickets. Experts said this will bring economic losses of an estimated 150 billion Japanese yen ($1.38 billion).

The Japanese government and the organizing committee have also decided to not accept volunteers for the Tokyo Olympics and Paralympics who live abroad.

The upper limit for spectators at the Tokyo Olympic and Paralympic stadiums will be decided sometime next month, although it is expected to be 50 percent.

The decision to ban international spectators will "ensure safe and secure Games for all participants and the Japanese public," Tokyo 2020 organizers said in a statement.

"We share the disappointment of all enthusiastic Olympic fans from around the world, and of course the families and friends of the athletes, who were planning to come to the Games," International Olympic Committee President Thomas Bach said in a statement.

As of Saturday, the overall number of global Covid-19 cases has surpassed 122.2 million, according to Johns Hopkins University.