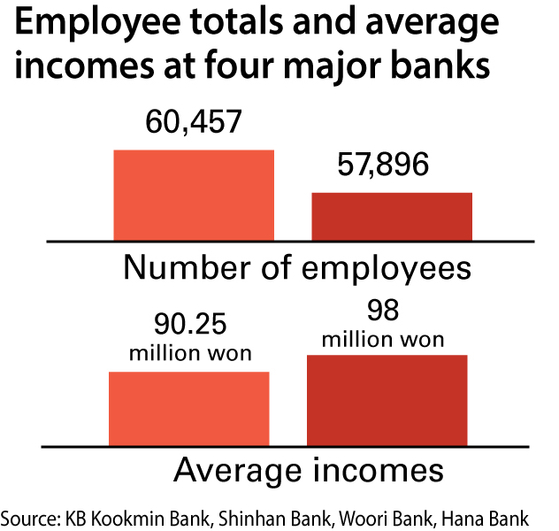 The average annual salary of employees at local commercial banks closed in on 100 million won ($88,000) last year, rising by over 8 percent compared to 2017.

According to corporate filings with the Financial Supervisory Service by four major commercial banks in Korea –  KB Kookmin Bank, Shinhan Bank, Woori Bank and Hana Bank – the average annual salary of their employees jumped by 8.6 percent, from 90.3 million won in 2017 to 98 million won last year.

The fall in the number of employees was in line with the falling number of bank branches.

Hana Bank closed the most number of offline branches, with 102 shuttered. After Hana Bank merged with the Korea Exchange Bank in 2015, it has been reducing overlapping branches.

Workers who voluntarily retired from the banks received huge compensation packages for their departure.

At Hana Bank, four retirees received more than 1 billion won in severance pay last year. They were each paid more than annual salary of Hana Bank CEO Ji Sung-kyu, which was 1.02 billion won.

Also at Woori Bank, the top five people by compensation last year were those that voluntarily retired. They were paid more in compensation for their early retirement compared to the bank's CEO Kwon Kwang-seok, who earned 553 million won in salary last year.

At Shinhan Bank, four out of five top income earners were retirees. One of the five was bank CEO Jin Ok-dong, who earned 1.13 billion won.