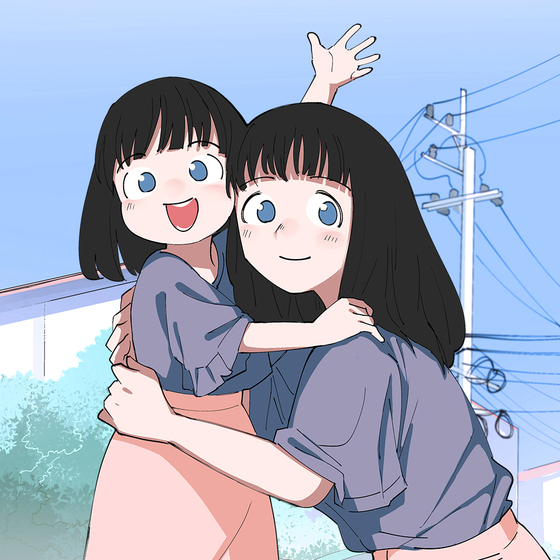 
Naver Webtoon’s “Teen Mom” series was harshly criticized by readers when it first hit the internet due to the topics it deals with which are evident from its title. When the webtoon was first published on May 3, 2019, the average rating for the first episode was 4.19 out of 10.

However, when it ended on March 5 this month, the rating for the final episode had surged to 9.89.

Was the author discouraged at first? Yes. What made him decide to carry on publishing the toon? A hand-written letter he received from a fan in Korea telling him they would like him to continue and the belief that like the letter’s author, other readers would also understand the story “Teen Mom” is trying to tell. 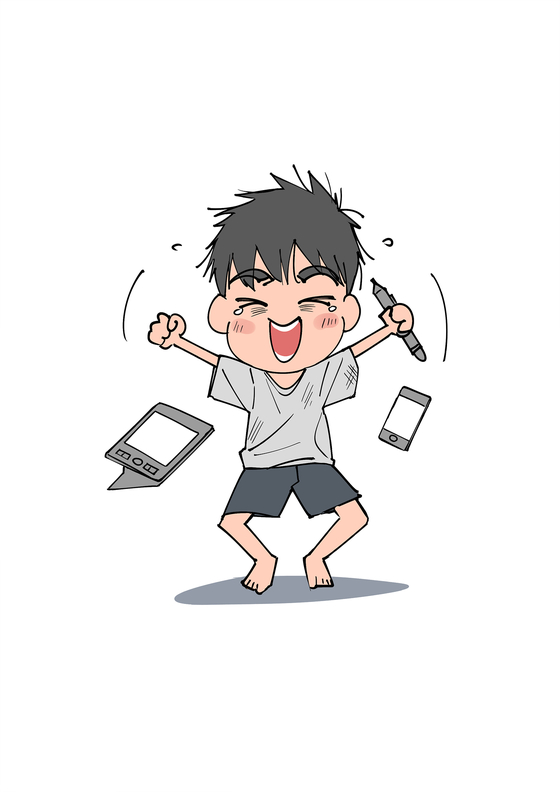 A caricature of theterm, author of ″Teen Mom″ [THETERM]


“When it comes to unplanned pregnancy, usually you hear people campaigning about the harm and problems that the mothers face,” “Teen Mom” author theterm, who wished to only use his pen name, told the Korea JoongAng Daily in an email interview held after the series ended earlier this month. The author is from Thailand and created the webtoon in Thai before having it translated to Korean.

“Just imagining that makes me feel like they will never be able to live a normal life like they used to,” he said. “However, after researching data, asking hospitals and expert nurses, [I learned that] every mother has a different story of their continued life. Some lives are ruined, while some are living perfectly normal lives. From this point, since the media are presenting the bad sides of the story so much already, what if there's a story about a person who made a mistake but is able to return to living a normal life? That would more or less raise the spirit of people who have [made the same] mistake. This is the main inspiration behind the story.”

“Teen Mom” tells the story of a teen's unplanned pregnancy and how she raises her child as a single mother. It starts with 18-year-old Ha-neul finding out she’s pregnant and arguing with herself about whether or not to tell her family, friends and boyfriend. The first thing she finds on the internet when she looks up “teenage pregnancy” are stories of people whose lives have been ruined due and she thinks to herself, “Is it really this bad?” She decides to tell her parents, but loses her chance to talk to them when a large family gathering is held. Day after day passes and Ha-neul keeps her pregnancy a secret until eventually, she gives birth to her daughter, Chae-hong.

A scene from Naver Webtoon series ″Teen Mom″ by Thai webtoonist theterm, shows Hae-neul's mother giving her a hug and saying, "It must have been so tough for you. What point would there be in telling you off now." Although it was one of the most touching scenes from the work, it was also one of the most criticized for being "unrealistic." [NAVER WEBTOON]


One of the major criticisms that the author received is that it is unrealistic that Ha-neul would keep her pregnancy a secret, even from her boyfriend. In the story, Ha-neul gets a separate apartment in the city — Bangkok in the Thai version — on the pretense that she will attend university, but doesn’t do so and lives off her tuition fees. The author understands that while it may seem “somewhat unreasonable,” he didn't want to write the story any other way.

“Since Ha-neul was 18 at that time, the obvious solution to her was to escape, and her decision was a rash one,” he said. “When I did the research, [I found that] there were lots of similar cases like Ha-neul in reality, where the family didn't know the girl was pregnant until the child delivery date happened. I, myself, wasn't even sure how they kept everything a secret up until that point." 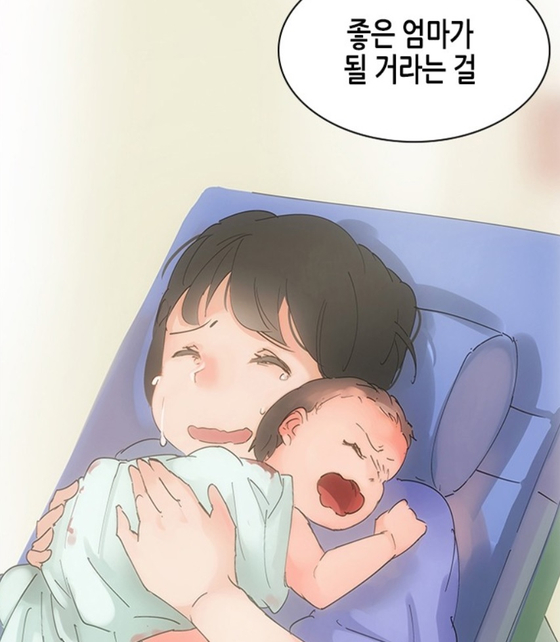 
Contrary to how early reactions criticized that it was unrealistic that Ha-neul would immediately become determined to raise her baby despite her age, her character remains steadfast in her decision to take responsibility despite not fully knowing what that entails. The absence of Chae-hong's father Seong-un was criticized at first but later proved to be a plot choice that allowed Ha-neul to fully flaunt her potential as a young single mother.

She is a “good girl in everybody’s perspective” and thus is guided by people around her who help set her in the right direction. Unicef Thailand “saw the potential of this webtoon being communicative media for teenagers” and theterm later collaborated with the organization to create a special episode “Knowing a bit before loving” to educate teenagers on safe sex.

The author also faced criticism that it was “inappropriate” for him to talk about teenage pregnancy as a man. Ha-neul is sometimes perceived to be portrayed as naïve and other characters describe her as “either very brave or thoughtless.” Some comments even called out Naver for serializing “problematic work.” 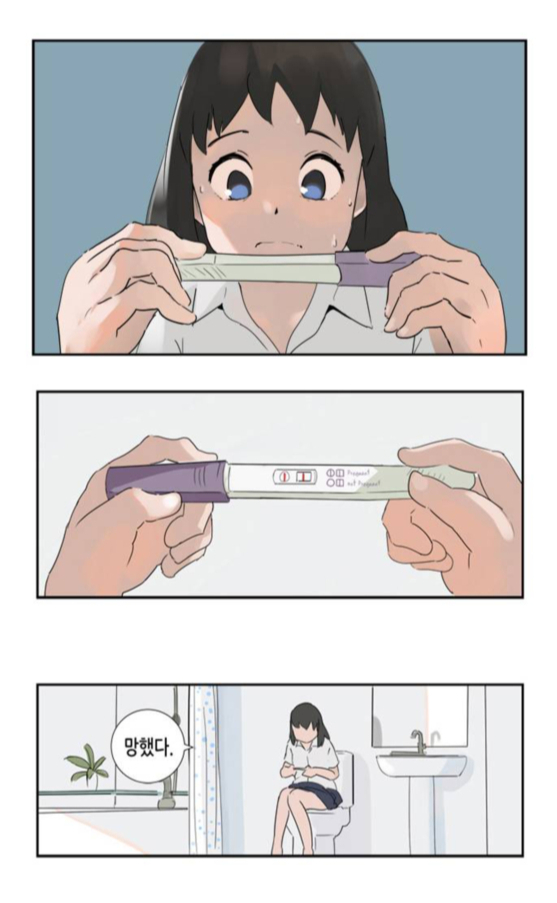 
“When I heard the Teen Mom launching news in Korea, I both felt excited and anxious, since I also received negative feedback during the initial launch in Thailand,” he said. “I got worried that if the title was published in Korea then it could receive the same wave of feedback, and it turned out to be true. However, I was hoping that as the story progresses to the stage where HaNeul grew up and learned from all the experiences she had been through then that would bring back the readers to like the title and follow the title, and that was what actually happened.”

He added, “I believe, as a creator, everyone, no matter what gender, has a right to tell a story from his or her own perspective. However, they need to research and analyze as much as possible to deliver the perspectives clearly without hurting anyone through their perspectives.” 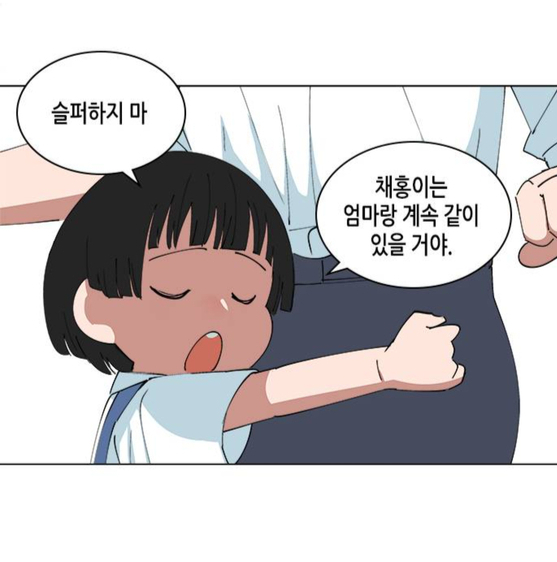 A scene from Naver Webtoon series ″Teen Mom″ by Thai webtoonist theterm, where Chae-hong hugs her mother Ha-neul and tells her, "Don't be sad. Chae-hong will always be with you." [NAVER WEBTOON]


Naver Webtoon has a number of works that were created by overseas authors and translated into Korean, but “Teen Mom” was the first from a Thai webtoonist. He started off drawing manga, but found Line Webtoon, the English franchise of Naver Webtoon, in 2015. Line Webtoon had a section called Canvas, on which everyone could post their work and receive feedback from other users. After the first couple of episodes, he was contacted by producers asking to publish his work on Line Webtoon. He said he made some adjustments to his style for his first official webtoon, including changing his illustration style so that he could meet his weekly workload.

“Korea is the place where webtoons originated from and there are a lot of top-tier webtoons being published,” he said, adding that he is also a fan of the ongoing webtoon series “Blossom.” “I was not sure if my title is qualified enough to be published there. However, knowing that there have been many people following 'Teen Mom' after publishing each episode, along with better comments after each episode, gives me more willpower to continue writing better titles in the future.”


“The negative feedback made me feel down and anxious, I wasn't sure on how to continue with the title, but then I received this letter. That letter was handwritten in English, and the writer said that [they] liked my title a lot and would like me to continue. This letter has been on my work desk ever since, to remind me when I'm feeling down that there are still people who like my work and are waiting to read my titles,” he said.

The author started a new series titled “Orange Girl” in Thailand on March 20, featuring Da-hong, Chae-hong’s friend that appears in the final season of “Teen Mom.” It’s “a slice of life, heartwarming and a comedic title” without the “drama to induce headaches.”

“If there's a chance then I'd like Korean fans to be able to experience the title too,” he said. “If you miss Chae-hong, then you can follow the new title, since Chae-hong might appear as a special guest in one of the episodes.”