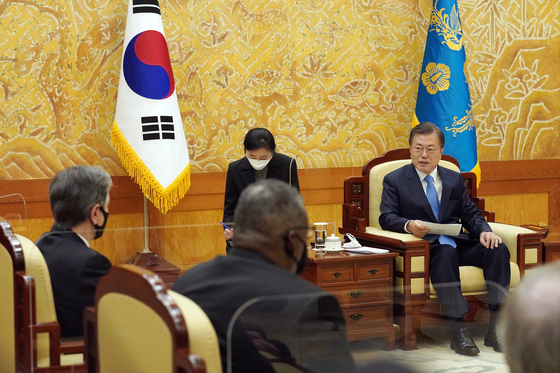 The U.S. State Department's 2020 Country Reports on Human Rights Practices is set to be published later this month. The annual report, released since 1977, covers a range of rights and how they are handled in countries, including respect for civil liberties, participation in the political process, corruption and lack of transparency in government, discrimination, workers’ rights and government attitude about investigations of human rights abuses.

The Joe Biden administration has said that it will be championing human rights around the world, including standing up against China’s use of coercion and aggression in the Asia-Pacific region, and highlighting North Korea's abysmal record.

But it is also serious about human rights issues in allied countries like South Korea.

The report’s section on South Korea, according to excerpts from the VOA, describes investigations into alleged corruption by Cho Kuk, his wife Chung Kyung-sim, and others connected to his family.

Cho, a former presidential senior secretary for civil affairs, resigned as justice minister on Oct. 14, 2019, just 35 days after his appointment to the post, amid many allegations of misdeeds.

The latest report introduces the controversy surrounding Rep. Yoon, who was indicted by prosecutors last September on charges of fraud, embezzlement and dereliction of duty relating to use of funds during her tenure as head of the Korean Council for Justice and Remembrance for the Issues of Military Sexual Slavery by Japan, an NGO dedicated to supporting victims of sexual slavery.

Yoon, a longtime advocate for the so-called comfort women, was elected a proportional lawmaker for the ruling DP in April 2020.

Last May, Lee Yong-soo, a wartime sexual slavery victim, accused Yoon of having exploited her and other survivors for decades. Yoon has denied the allegations against her.

The report also listed the expulsion of Rep. Kim Hong-gul, the youngest son of former president Kim Dae-jung, from the DP last September over allegations he failed to report real estate assets before taking office as a first-term lawmaker.

“Sexual harassment was a significant social problem,” the report also said, noting there were allegations including “high-profile cases involving public officials, reported in media throughout the year.”

Ex-Mayor Park committed suicide on July 9, 2020, “the day after his former secretary filed a complaint to the police alleging that Park had sexually harassed her,” the report described.

According to the complaint, Park since 2017 had repeatedly touched the woman without her consent and sent her inappropriate messages and photos, continuing to harass her even after she transferred offices. She claimed Park sent her photos of himself in his underwear and called her into a bedroom attached to his office, asking her to embrace him.

The report noted that the case was terminated because of Park’s death, in accordance with the law, but added that women’s rights advocates continued to press for a complete investigation.

It noted, “Park was known as a champion for women’s rights and was highly regarded for his successful representation in 1993 of the victim in what is seen as the country’s first sexual harassment case.”

Likewise, former Busan Mayor Oh, the first DP politician ever to be elected to that position, resigned in April 2020 after admitting to “unnecessary physical contact” with a female subordinate and was indicted in August on charges of indecent assault.

The report raised concerns over a law passed in the National Assembly last December banning the dispatch of propaganda leaflets across the inter-Korean border.

The law, which revises the Development of Inter-Korean Relations Act, stipulates a maximum prison sentence of up to three years, or a fine of up to 30 million won, for spreading items like leaflets, printouts, money or electronic storage devices near the inter-Korean border with the intention of sending them to the North.

The South Korean government said the law was needed to ensure the safety of citizens living near the inter-Korean border, while defector groups and human rights organizations argued that the ban on leaflets infringes upon basic rights including the freedom of expression.

The Donald Trump government put human rights issues on the backburner, especially during its denuclearization negotiations with Pyongyang.

The Moon Jae-in administration has also been hesitant to criticize North Korea on human rights.

The UN Human Rights Council is expected to adopt a resolution on North Korean human rights violations this week. Pyongyang responds sensitively to criticism of its rights situation, calling them political attacks, and Seoul in recent years has refrained from co-sponsoring such resolutions taking into consideration inter-Korean dialogue.

In talks with South Korean Foreign Minister Chung Eui-yong in Seoul last Wednesday, U.S. Secretary of State Antony Blinken said, “The authoritarian regime in North Korea continues to commit systemic and widespread abuses against its own people. We must stand with people demanding their fundamental rights and freedoms and against those who repress them.”

He later reiterated a similar message in a joint press conference with the two countries’ defense chiefs the following day, appearing to link the denuclearization of North Korea with improving the rights situation for North Koreans.

President Moon Jae-in, a former human rights lawyer, in his meeting with Blinken and U.S. Defense Secretary Lloyd Austin at the Blue House Thursday said, “As a 70-year partner to the United States this year, core values and basic ideals such as democracy and human rights, Korea is ready to work with the U.S. to meet common challenges. In particular, we will continue to coordinate closely with no daylight between us for complete denuclearization of and establishing lasting peace on the Korean Peninsula.”

The State Departments 2017 report described in detail the influence-peddling scandals involving former President Park Geun-hye and her friend Choi Soon-sil, and the compilation of a blacklist of Park’s critics including some 10,000 artists, authors, filmmakers, singers, and actors.

“The State Department report has been released since 1977 and is divided into various categories including controversial corruption cases that were reported in that past year through media and civic groups on issues related to human rights,” a Seoul Foreign Ministry official said Monday on the significance of the report.