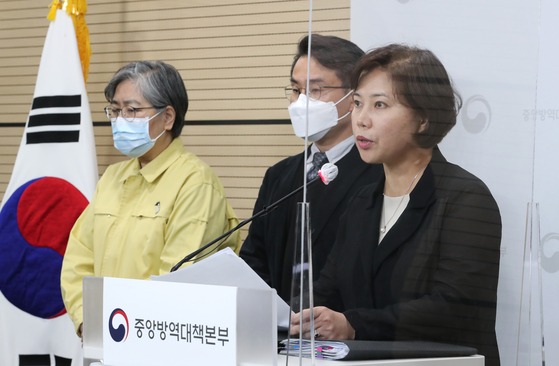 Choi Eun-hwa, a professor at the Seoul National University College of Medicine, announces Monday the results of a review conducted by an independent panel of experts who found that the AstraZeneca vaccine in not linked to blood clots in a press briefing at the Korea Disease Control and Prevention Agency headquarters in Cheongju, North Chungcheong. [YONHAP]


An independent panel of experts found no link between AstraZeneca shots and the forming of blood clots Monday, as the country prepares to inoculate people 65 and older at nursing homes with that type of Covid-19 vaccine starting Tuesday.

President Moon Jae-in, 68, and first lady Kim Jung-sook, 66, are scheduled to receive AstraZeneca shots Tuesday ahead of the Group of Seven, or G-7, summit to be held in Britain in early June.

“The safety and effectiveness of the AstraZeneca vaccine has been reconfirmed internationally,” said Moon in a meeting with aides at the Blue House Monday, noting most European countries have resumed AstraZeneca shots after concerns over blood clots.

“Vaccinations are a way to protect our own safety and the safety of our society as a whole through collective immunity,” added Moon, encouraging the public not to doubt the safety of the Covid-19 shots and not to be fooled by "fake news" promoting vaccination skepticism.

After meeting Saturday, the Korea Advisory Committee on Immunization Practices announced Monday that the AstraZeneca vaccine is not linked to blood clots and recommended its continued rollout.

Choi Eun-hwa, the head of the committee and a professor of endemic diseases at the Seoul National University College of Medicine, said in a briefing, “The AstraZeneca vaccine has proven to be an effective and safe vaccine that reduces severe disease and fatalities caused by Covid-19 in clinical trials and in the actual medical field. The benefits of vaccination are far greater than the risk of side effects.”

The committee’s recommendations are in keeping with advice from the European Medicines Agency and World Health Organization, which found that benefits of vaccinations in preventing Covid-19 hospitalizations and deaths outweigh the risks of side effects.

However, health authorities said that two out of 10 cases of serious allergic reactions were related to the AstraZeneca vaccines, including one case of an anaphylactoid reaction that occurred 10 minutes after the administering of the shot.

There were two cases of blood clots forming after AstraZeneca shots in Korea.

Health authorities said that around 288,000, or 76 percent, of over 376,000 people eligible for this batch of vaccines agreed to the AstraZeneca vaccination.

The findings of a large U.S. trial released Monday showed that the Oxford-AstraZeneca vaccine is 79 percent effective in preventing symptomatic illness and 100 percent effective against severe disease and hospitalization.

A fifth of the 32,449 participants from the United States, Peru and Chile in a Phase 3 trial were 65 and over, and the shots were 80 percent effective in older participants according to this study.

As of Sunday midnight, 676,607 people in Korea had been administered Covid-19 vaccines, or around 1.3 percent of the country's population of 52 million. So far, 619,100 were administered AstraZeneca vaccines, while 57,507 received the Pfizer shots since the country's vaccination program kicked off on Feb. 26.

There have been 9,703 cases of side effects reported after vaccinations, though most were mild symptoms such as headaches and fevers. There were 89 cases of suspected anaphylactoid reactions.

There were 16 deaths reported after vaccinations, though health authorities said there was no proof of any causality.

The government aims to inoculate 12 million people by the end of June, including seniors 65 and over, medical professionals and teachers of younger students. The general public can expect to get vaccinated in the second half of the year. Foreigners residing in the country will be eligible for free vaccinations. 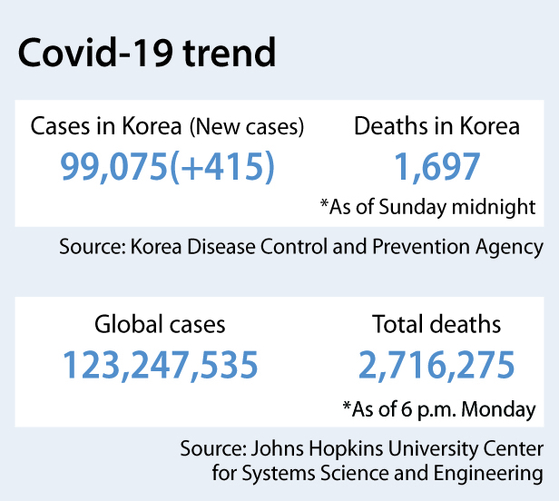 The country reported cases in the 400s for a sixth consecutive day as it struggles to bring down infections linked to more frequent gatherings with warmer spring weather.

Korea reported 415 new Covid-19 patients, including 396 local infections, raising the total cases to 99,075 as of Sunday midnight, according to the Korea Disease Control and Prevention Agency (KDCA) Monday.

There was one fatality, increasing the total death toll to 1,697.

Korea reported 36 new cases of more transmissible variants from overseas, of which 26 were local infections, according to the KDCA.

Two were of the South African variant, one of the Brazilian and the others were the British strain.

This raises total variant cases to 249, of which 211 are British variants, 30 South African and eight Brazilian.

There were 19 new imported cases as of Sunday midnight.