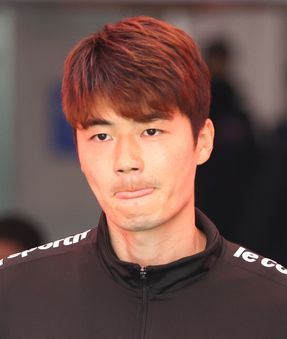 Ki's lawyer, Song Sang-yeop of Seopyeong Law Firm, said in a press release Monday that Ki filed the suits demanding 500 million won ($442,000) in compensation for damages against him by the two accusers claiming to have been sexually assaulted by Ki.

The legal team of the two accusers at Hyun Law also put out a press release, saying they are "truly welcoming being able to finally reveal the truth in court."

The sexual assault allegation of Ki was first raised on Feb. 24, when two individuals claimed that they were forced to perform sexual acts by two older students on the same elementary school football team in South Jeolla and were "mercilessly beaten" if they did not oblige. Although no names were mentioned, people were quick to hone in on Ki based on the details mentioned in the statement.

Ki immediately denied the allegations in an Instagram post the next day and at a press conference after the opening match of K League 1 on Feb. 27.

The case garnered more attention on March 16 after testimonies of the alleged victims aired in a MBC investigative journalism program, "PD Note."

In the television program, Park Ji-hun, attorney of the two accusers, appeared and said "[The alleged victims] talked about things that they could not have said unless they experienced it."

Ki's legal team responded that Ki would take legal action against the two accusers, saying the broadcast provided only a "biased view."

Attorney Song referred to audio clips of a phone conversation between Ki's former teammate and one of the accusers.

The audio clips purportedly reveal one of the accusers saying, "[After the case was initially reported,] we said, 'This is false, please publish a [correction] article,' and, 'It is not Ki.' But for the attorney [Park], if this becomes false, then it would be a public scheme so [Park] can no longer live in Korea."

Attorney Park made a rebuttal, saying the audio files are "maliciously edited from the ones already revealed to the media last month" and Ki made threats and placations through various media since the case was first revealed.

"I felt deeply anxious and afraid, and it is true that for a moment I foolishly thought I'd pretend the whole thing didn't happen, just like Ki [claims]," the accuser said in a statement distributed through Park.

"During the process, I consulted with attorney Park, and I decided that revealing the truth is necessary not only for me, but it is also necessary in order to break the bad habits of Korean sports."

After Ki's legal action was reported on Monday, Park revealed the phone conversation recording, adding that there were 60 other placations and threats in addition to the phone call.

Song urged the accusers to disclose evidence as soon as possible, while Park maintained the position that he will disclose any further evidence in court when Ki files a lawsuit. Since Ki did file a civil and criminal suit, a fierce legal battle will likely ensue over the sexual assault case from over 20 years ago.