Public transport use dropped as Covid spiked in 2020

Public transport use dropped as Covid spiked in 2020 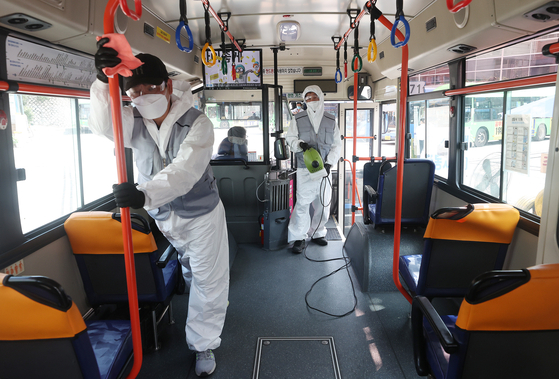 A bus is sanitized in a parking lot in Seoul in August 2020. [YONHAP]


Public transportation usage significantly dropped due to Covid-19 in 2020, according to analysis by the Ministry of Land, Infrastructure and Transport released Tuesday.

The number of people traveling via public transportation, including buses and subways, dropped roughly 27 percent last year, the statistics indicated.

Public transportation cards were used 6.72 billion times on buses and subways. This is a drop from 9.18 billion in 2019.

The drop was much sharper during the weekend and on holidays, at 36.1 percent, indicating that people stayed home on their days off or used their family cars when traveling.

On weekdays, the drop was 24 percent.

“It seems as though people have limited their use of public transportation other than for the purpose of commuting to work,” said Kim Nam-gyun, head of the ministry’s community transport and welfare service division.

In Gwangju and the neighboring areas, which includes Naju, Damyang, Hwasun, Hampyeong and Jangseong county, the drop was 32 percent.

Daegu, which became the hotspot of the first wave of Covid-19 last year, and the neighboring areas including Gumi and Cheongdo trailed behind with a 30.8 percent drop.

In the Daejeon area, which includes Sejong, the drop was 29.2 percent.

Public transportation use in Seoul and neighboring Gyeonggi and Incheon fell 27 percent.

The government study shows a sharp drop of public transportation use when the spread of Covid-19 spikes.

There have been three major spikes since the first case was confirmed in January 2020.

The first spike was in Daegu around late February and through March, when the virus spread especially among followers of the Shincheonji Church of Jesus.

According to the analysis, the average daily use of public transportation in March at the height of the first wave dropped 34 percent year on year. All schools postponed the first day of classes. Social distancing was implemented near the end of March.

In the case of Daegu, public transportation use plummeted nearly 69 percent due to the city’s lockdown.

Public transportation started to gradually recover in April and then dropped more dramatically when the second wave started in August.

It again fell around December, when the country was faced with the third wave. The number of infected on Dec. 13 for the first time exceeded 1,000. The government was forced then to implement its toughest social distancing.

In December, the use of public transportation fell near 39 percent.

The situation is probably much the same so far this year as social distancing regulations are still in place.

While the number of daily cases has fallen to 300 to 400 recently, the country still has not yet exited the third wave.

If you have to stay at home, go shopping