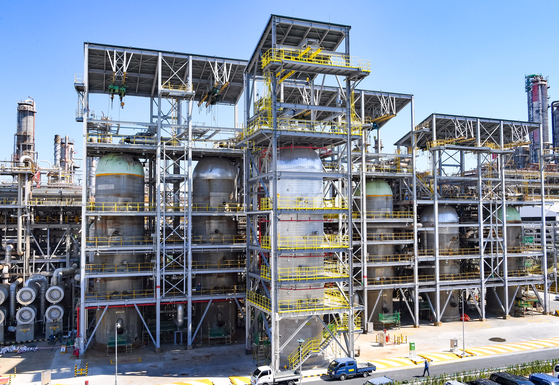 S-Oil finished extending its residue hydro-desulfurization unit (RHDS) facilities and initiated operation on March 20 as the oil refining company continues to seek ways to run its business in an eco-friendly way.

RHDS reduces emissions of pollutants made in the process of producing fuel by removing impurities from high-sulfur residue oil. According to the company, the extended RHDS facility increased the amount of residue oil desulfurized by 18 percent from 34,000 barrels to 40,000 barrels per day.

Desulfurized residue oil can either be used to produce ultra-low sulfur diesel and naphtha or can be made into more high value-added substances such as marine fuel.

S-Oil said it committed 73 billion won ($64.7 million) to building a vapor combustion unit (VCU) which also reduces emissions of pollutants into the air from the storage tanks in addition to extending the RHDS facilities.

The VCU, which began construction in Sept. 2020, also started operations earlier this month.

“We are planning on the construction of a larger-capacity VCU to prevent the leakage of vapor from crude oil and fuel storage tanks at our Ulsan refinery,” the company said in a statement Tuesday.