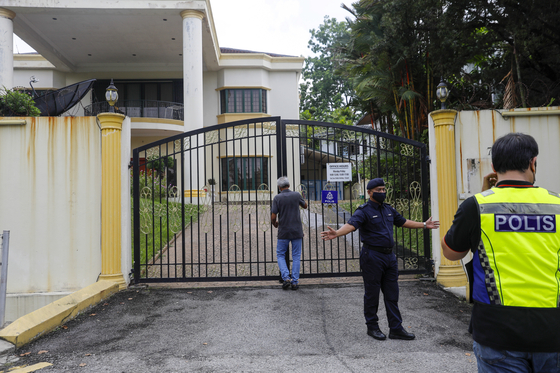 A man locks the gates of the North Korean embassy in Kuala Lumpur, Malaysia, as police guard the premises Sunday. Pyongyang’s diplomats and their families departed Kuala Lumpur Sunday after North Korea and Malaysia severed diplomatic ties over the extradition of a North Korean businessman, Mun Chol-myong, to the United States over money laundering charges. [EPA/YONHAP]


Court proceedings began Monday for Mun Chol-myong, a 55-year-old businessman accused of money laundering who became the first North Korean national to be extradited to the United States.

The U.S. Department of Justice said in a statement Monday that Mun, who was extradited from Malaysia, made his first appearance in federal court in Washington, where he was first indicted on May 2, 2019, and faces six counts of money laundering.

The top Malaysian court last week agreed to the extradition of Mun, an alleged intelligence operative who has been accused of supporting illicit shipments of luxury items from Singapore to North Korea and laundering funds through shell companies. The move has led to the severing of diplomatic ties between North Korea and Malaysia and comes as U.S. authorities have cracked down on Pyongyang’s sanctions evasion tactics as a means of pressuring the regime to return to denuclearization negotiations.

Mun and his conspirators are accused of defrauding U.S. banks and laundering money in transactions totaling more than $1.5 million through the American financial system between April 2013 and November 2018 to evade U.S. and UN sanctions imposed on North Korea, according to unsealed court documents Monday.

Mun is allegedly affiliated with the Reconnaissance General Bureau, the North’s main intelligence agency which is subject to UN and U.S. sanctions.

According to the indictment, Mun and his conspirators used “a web of front companies and bank accounts registered to false names” and removed references to the Democratic People’s Republic of Korea (DPRK) from international wire transfers to deceive American correspondent banks into processing U.S. dollar transactions and to “avoid detection of their sanctions-busting operation.”

Mun had been detained in Malaysia since his arrest by local authorities on May 14, 2019. He has denied the allegations against him, saying they were politically motivated.

The U.S. Federal Bureau of Investigation (FBI) took him into custody in Washington on Saturday.

“He is the first North Korean intelligence operative — and the second ever foreign intelligence operative — to have been extradited to the United States for violation of our laws,” said John Demers, the assistant attorney general for the Justice Department’s National Security Division, in a statement. “We will continue to use the long reach of our laws to protect the American people from sanctions evasion and other national security threats.”

The investigation on Mun was conducted in coordination with the FBI’s Counterintelligence Division and supported by the U.S. Indo-Pacific Command and the FBI’s Investigative Operations Division, the Justice Department said.

Pyongyang shuttered its mission in Kuala Lumpur, and North Korea diplomats and their families, including the embassy's charge d'affaires Kim Yu-song, departed the Southeast Asian country Sunday for Shanghai.

Malaysia and North Korea’s diplomatic ties, which date back to 1973, have been strained since North Korean leader Kim Jong-un’s estranged half brother Kim Jong-nam was killed at Kuala Lumpur International Airport in February 2017 after two women, allegedly hired by North Korean agents, smeared his face with the VX nerve agent. Pyongyang denied involvement.

“One of the FBI’s biggest counterintelligence challenges is bringing overseas defendants to justice, especially in the case of North Korea,” said Alan Kohler Jr., assistant director of the FBI’s Counterintelligence Division. “Thanks to the FBI’s partnership with foreign authorities, we’re proud to bring Mun … to the United States to face justice, and we hope he will be the first of many.”