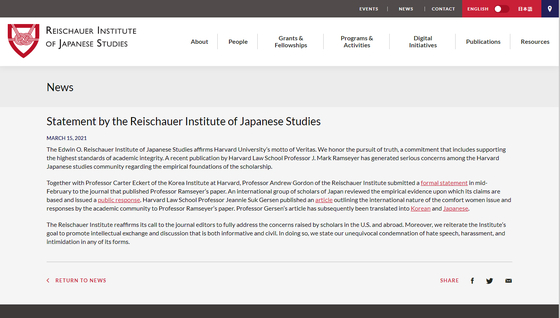 The term comfort women is a euphemism referring to victims of the Japanese military's wartime sexual slavery.

A statement posted on the institute’s website on March 15 was the second official response from a Harvard institution on the issue, following a Feb. 17 statement by Harvard's Korea Institute. Ramseyer is the Reischauer Institute's Mitsubishi Professor of Japanese Legal Studies.

“A recent publication by Harvard Law School Professor J. Mark Ramseyer has generated serious concerns among the Harvard Japanese studies community regarding the empirical foundations of the scholarship,” said the statement from the Reischauer Institute.

“The Reischauer Institute reaffirms its call to the journal editors to fully address the concerns raised by scholars in the U.S. and abroad.”

Ramseyer's paper denied the historical consensus on Japan’s wartime sex slaves, arguing that they were prostitutes who voluntarily concluded indenture contracts in return for large advance sums with one- or two-year maximum terms, with the ability to leave early if they paid back their debts.

Ramseyer also claimed that the imperial Japanese military did not play a role in the recruitment of women into sexual slavery.

The paper was originally due to be published in the March edition of the International Review of Law and Economics.


However, in response to international outcry over Ramseyer’s paper, the International Review of Law and Economics asked Ramseyer on March 3 to respond to criticism from other scholars by March 31. Due to the journal's request, the paper is unlikely to be published in the March edition, though it has been available online since Dec. 1.

“We reiterate the Institute’s goal to promote intellectual exchange and discussion that is both informative and civil. In doing so, we state our unequivocal condemnation of hate speech, harassment, and intimidation in any of its forms.”

In a Feb. 5 interview with the Harvard Crimson, Ramseyer said he began receiving hate mail and death threats after Korean media caught wind of his upcoming publication.

Other faculty at the Reischauer Institute have also been subject to harassing messages. On March 8, Ramseyer and the institute’s director, Mary C. Brinton, received several rounds of hate mail, at least one of which was sent to 35 other Harvard faculty members.

Professors who spoke out publicly against Ramseyer’s article have also received abusive messages.

Northwestern University professor Amy B. Stanley, who co-wrote a critical rebuttal of Ramseyer’s paper which urged the journal not publish his paper, also said she was the subject of “oblique threats” in an emailed statement to the Crimson.