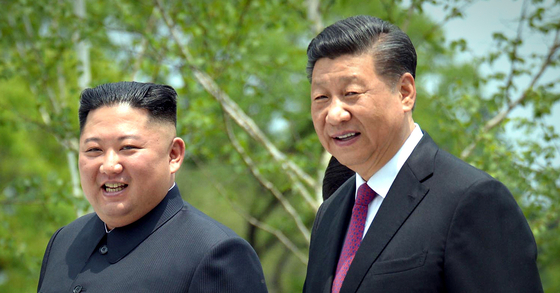 North Korean leader Kim Jong-un, left, and Chinese President Xi Jinping take a stroll at the Kumsusan State Guesthouse in Pyongyang as they hold their fifth summit in June 2019. [YONHAP]

Kim in his message to Xi called for “intensifying the strategic communication” between their two countries against common “hostile forces,” according to the North’s state-run Korean Central News Agency (KCNA).

Xi noted that “international and regional situations are undergoing grave changes,” according to the KCNA, and expressed willingness to “make new positive contributions to defending peace and stability on the Korean peninsula and achieving peace, stability, development and prosperity in the region.”

Kim relayed the results of the rare congress and conveyed the party stance to bolster the defense capabilities of the country and strengthen cooperation between North Korea and China.

On the inter-Korean and North-U.S. relations, Kim conveyed to Xi that the party, “after an in-depth study and analysis of the situations of the Korean peninsula and the international relations,” has “stressed the need to strengthen the unity and cooperation" between the two countries "to cope with the hostile forces' all-round challenges and obstructive moves.” The remarks appeared to be an indirect reference to the United States and Western countries.

He congratulated Xi for successfully tackling the “terrible disaster caused by the world health crisis,” in reference to the Covid-19 pandemic, and “firmly defending socialism in the face of vicious slander and pressure by the hostile forces.”

Their messages were exchanged during a meeting Monday in Beijing between senior Chinese diplomat Song Tao, a minister of the International Department of the Chinese Communist Party’s Central Committee, and Ri Ryong-nam, North Korea's new ambassador to China.

During the rare Workers’ Party congress in January, Kim admitted to failures in the country’s five-year economic plan as North Korea faces intensified isolation due to strict international sanctions and the coronavirus pandemic. He also called for increased military power and greater nuclear war deterrence.

Kim and Xi have held five summits including their first talks in March 2018 in Beijing, marking the young North Korean leader’s first trip out of his country since he assumed power after the death of his father Kim Jong-il in 2011. Kim Jong-un has met with Xi ahead of making important decisions including before his two summits with former U.S. President Donald Trump. They held their fifth summit in June 2019 in Pyongyang, Xi’s first visit to Pyongyang as a Chinese leader.

U.S. Secretary of State Antony Blinken in a visit to Seoul last Thursday said that China has a "critical role” to play in persuading North Korea to denuclearize but also called out Beijing for “aggressive and authoritarian behavior” that challenges the stability of the Indo-Pacific region.

In the first high-level Sino-U.S. talks since the launch of the Joe Biden administration, Blinken and White House National Security Adviser Jake Sullivan met with Yang Jiechi, director of China’s Office of the Central Commission for Foreign Affairs, and Wang Yi, the Chinese foreign minister and state councilor, over Thursday and Friday in Anchorage, Alaska.

The Chinese Foreign Ministry in a statement Saturday said that “China and the United States should join hands to deepen South-North cooperation, including cooperation in third-party markets for developing countries,” as it listed areas they could work together in amid intensified Sino-U.S. rivalry. But it added China will also take “legitimate and necessary measures to safeguard its sovereignty, security and development interests.”