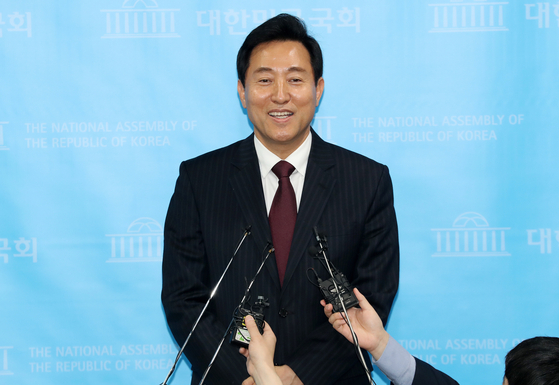 Oh Se-hoon of the People Power Party gives a press conference at the National Assembly after winning the conservative bloc's contest to nominate a single candidate. [YONHAP]

Oh, who is running for the main opposition People Power Party (PPP), was declared the winner of two mobile phone surveys that polled voters on which of the two conservative candidates they preferred.

The surveys, conducted by two separate pollsters on 3,200 voters in Seoul via mobile phones Monday, was originally expected to stretch into Tuesday. In accordance with election law, the specifics of the polling results were not made public, but officials from both the PPP and Ahn’s People’s Party (PP) said that Oh established an insurmountable margin over Ahn by Tuesday morning.

In his nomination acceptance speech, Oh pledged to pave the way for the conservative bloc’s victory in the presidential election next year.

"I will definitely heed the call of Seoul’s citizens to pass judgment against the [current] administration and open up the path to a win in the next presidential election," Oh said.

In his concession speech, Ahn promised to support Oh’s candidacy.

“Where the path to conservative unity was blocked, I opened a path by sacrificing all that I have,” Ahn said. “I will now do my best to ensure that our single candidate will win.”

Oh’s victory over Ahn, his main challenger from the conservative bloc, puts him within reach of an end to a full decade in the political wilderness.

Once mayor of Seoul, Oh lost his job by opposing a plan by the city council –– controlled by the Democratic Party –– to provide free school meals to every elementary and middle school child in Seoul.

Oh argued for free lunches only for needy children and called a citywide referendum on the issue. The turnout for the referendum was below the legal minimum quorum, leading him to resign.

Following his resignation, Oh was a visiting fellow at King’s College London, and also conducted city governance lectures in Britain, China and Peru. He attempted a return to politics by running in the 2016 legislative election to represent Seoul's Jongno District. He was defeated by Chung Sye-kyun, currently prime minister.

With Oh’s victory, the Seoul by-election has effectively become a two- way race between him and Park Young-sun of the ruling Democratic Party.
In response to the survey results, Park called the election “a choice between Park Young-sun, a Seoul mayor for the future, or an old and failed former mayor.”

Oh was the polling frontrunner in a hypothetical two-candidate race.

According to a Realmeter survey commissioned by the Munhwa Ilbo, conducted on March 13 and 14 and announced last Monday, Oh would score 54.5 percent and Park 37.4 percent, assuming Ahn was no longer in the running.

Oh will face Park in the by-election on April 7.

Chaos in the opposition