President and first lady receive first shots for those over 65

President and first lady receive first shots for those over 65 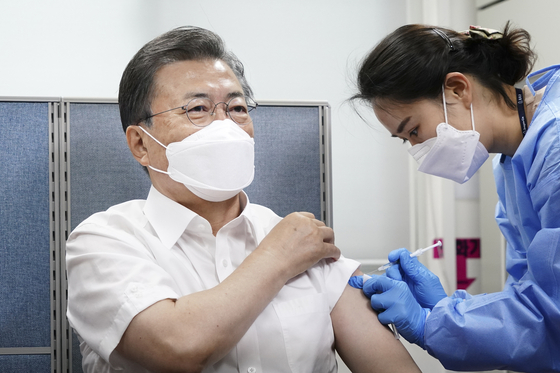 
President Moon Jae-in and First Lady Kim Jung-sook on Tuesday became the first of those aged over 65 in Korea to be vaccinated for Covid-19.

“President Moon is doing just fine after the vaccination,” said Kang Min-seok, presidential spokesman, in a press briefing Tuesday afternoon. “The president said that the vaccines in Korea are being administered without a problem, but that the country may do better to speed up the vaccinations so that we can return to a state of normalcy.”

President Moon is 68 and First Lady Kim are 66 this year. They received their first dose of the AstraZeneca shots ahead of the Group of Seven, or G-7, summit to be held in Britain in early June. Their second doses are scheduled for mid-May.

Nine officials who will be traveling with the president, including Seo Hoon, the president’s national security chief, were also vaccinated Tuesday.

President Moon returned to work 30 minutes after the vaccination, according to the presidential office.

Korea began its vaccination program on Feb. 26, beginning with medical staff members at hospitals focusing on Covid-19 treatment, as well as staff members and patients younger than 65 at nursing homes for the elderly and long-term care hospitals.

Korea Disease Control and Prevention Agency (KDCA), Korea’s authority on the Covid-19 response, had held off the vaccinations for people aged over 65 until additional clinical data was available about the effectiveness of the AstraZeneca vaccine among the elderly population.

After studies in Britain, Scotland and the United States showed that the AstraZeneca vaccine is at least 70 percent effective against severe disease and hospitalization of elderly patients, the KDCA decided to vaccinate people aged over 65 at nursing homes, convalescent hospitals and other high-risk facilities starting Tuesday.

The KDCA said that around 288,000, or 76 percent, of over 376,000 people eligible for this batch of vaccines agreed to receive the AstraZeneca vaccination.

As of Monday, a total of 680,560 people in Korea were vaccinated, according to the KDCA.

Of those vaccinated, a total of 9,692 showed minor side effects such as headaches, muscle pains, fever and nausea.

Sixteen people who received vaccines have died as of Monday. The KDCA has yet to confirm whether the deaths were caused by vaccinations.

Despite the suspensions of AstraZeneca vaccines in more than a dozen countries, mostly in Europe, over concerns that the shots may be causing blood clots, Korea is pushing through with its vaccination program.

There were two cases of blood clots forming after AstraZeneca shots in Korea. The recipients were reported to have recovered as of Monday.

The Korea Advisory Committee on Immunization Practices, an independent panel of experts, announced Monday that the AstraZeneca vaccine is not linked to blood clots and recommended its continued rollout.

The committee’s recommendations are in keeping with advice from the European Medicines Agency and World Health Organization, which found that the benefits of vaccination in preventing Covid-19 hospitalizations and deaths outweigh the risks of possible side effects.

Korea recorded an additional 346 cases of Covid-19 infections on Monday, of which 15 were imported.

Of the local cases, 97 were based in Seoul, 120 in Gyeonggi, 29 in South Gyeongsang and 19 in North Gyeongsang.

Novavax Covid-19 vaccine approved for use in Korea