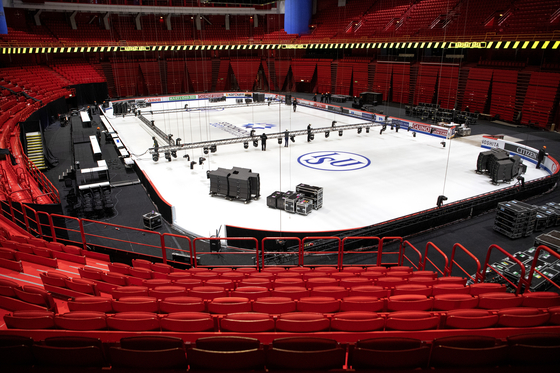 The rink is prepared for the 2021 ISU World Figure Skating Championships at the Stockholm Globe Arena in Stockholm, Sweden, on Friday [AP/YONHAP]


The International Skating Union (ISU) announced Monday that a participant at the World Figure Skating Championships in Stockholm, Sweden, has tested positive for Covid-19.

The ISU announced that the positive case was detected during routine coronavirus testing at the world championships, adding that the infected person "will not be allowed to participate," apparently indicating that they are a skater.

Despite the positive result, the ISU has decided to continue with the world championships as planned, with the unnamed infected person expected to the only participant not to take part, assuming no more positive cases are reported.

An official from the Korean Skating Union has confirmed that the infected person is not Korean. All three Korean contestants at the world championships — Kim Ye-lim, Lee Hae-in and Cha Jun-hwan — are expected to compete as planned.

Disruption at the world championships could have a serious impact this year as it is one of the qualifying events for the 2022 Beijing Winter Olympics. The women's short program is scheduled to be held on Wednesday and the men's on Thursday, with the women's and men's free skating on Friday and Saturday respectively.

All ISU skaters and staff are currently inside a "competition bubble" in Stockholm, and are not in contact with anybody outside of the bubble. The ISU requires everybody to have regular Covid-19 tests and daily temperature checks during the competition period.