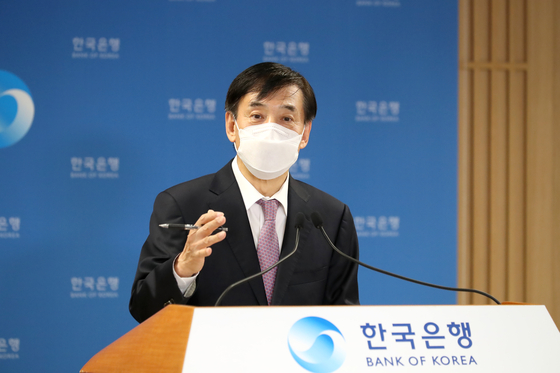 It's too early to worry about inflation and raise interest rates, Bank of Korea Governor Lee Ju-yeol said in a written statement to reporters Tuesday.

"As oil prices pick up quickly and food prices soar, there are growing worries about inflation," Lee wrote. "If the quick containment of Covid-19 brings pent-up demand, there may be temporary inflation, but it is not likely to last."

According to Lee, consumer prices could increase in the high 1-percent range from the second quarter largely due to base effect, as oil prices crashed in the second quarter of 2020. In annual terms, Lee projects consumer prices to rise faster than the central bank's earlier forecast of 1.3 percent, but he expects the rate to be lower than 2 percent.

"Based on our projections on consumer price growth, we believe it is not yet time to adjust our monetary policies to counter inflation-related risks," Lee said, adding that the central bank will closely monitor the market for stronger-than-expected inflationary forces.

The central bank chief said it is hard to say the country's economy has returned to normal, especially considering the state of the real economy, though globally there have been signs of recovery.

BOK isn't fazed by Fed's jacking up of interest rates