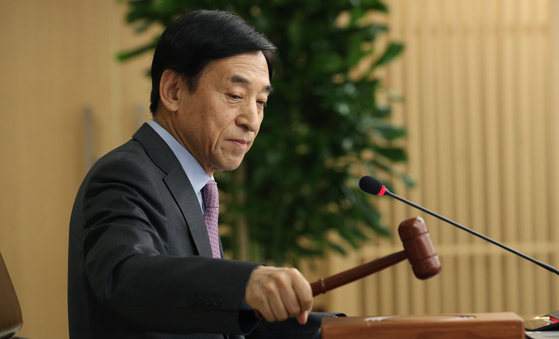 It's too early to worry about inflation and raise interest rates, Bank of Korea Gov. Lee Ju-yeol said in a written statement to reporters Tuesday.

"As oil prices pick up quickly and food prices soar, there are growing worries about inflation," Lee wrote. "If the quick containment of Covid-19 brings pent-up demand, there may be temporary inflation, but it is not likely to last."

According to Lee, consumer prices could increase in the high 1-percent range from the second quarter largely due to base effect, as oil prices crashed in the second quarter of 2020. In annual terms, Lee projects consumer prices to rise faster than the central bank's earlier forecast of 1.3 percent, but he expects the rate to be lower than 2 percent.

"Based on our projections on consumer price growth, we believe it is not yet time to adjust our monetary policies to counter inflation-related risks," Lee said, adding that the central bank will closely monitor the market for stronger-than-expected inflationary forces.

The central bank chief said it is hard to say the country's economy has returned to normal, especially considering the state of the real economy, though globally there have been signs of recovery.

On the production side, Lee said global governments will likely increase domestic production and diversify their global supply networks as they have seen how the value chain can collapse during a crisis.

The United States and Europe have already started to increase domestic production of semiconductors and reduce dependence on Asian countries.

Lee also expects working at home to become the norm for many after the pandemic.

A survey by the Korea Enterprises Federation conducted in September last year with the country’s major corporations indicated that 53 percent of the respondents expect working at home to thrive in the future.

From the consumption side, Lee said digitization in the retail sector will only speed up as people try to avoid face-to-face transactions.

Lee said it will be difficult for the wealth gap, which widened during the crisis, to narrow quickly.

Income inequality grew worse during pandemic, as those with less stable jobs were hit harder by the economic downturn, and this will last for some time, he said.

But considering the crisis also brought about innovation, such as vaccines being developed less than a year after the outbreak started, Lee said that governments and companies should make crisis into opportunity.

He also touched on the Bank of Korea’s progress with the central bank digital currency, or CBDC.