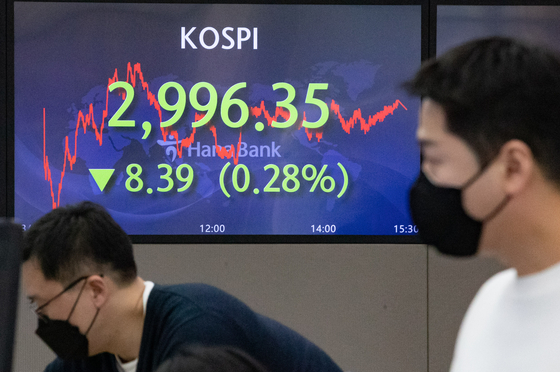 A screen in Hana Bank's trading room in central Seoul shows the Kospi closing at 2,996.35 points on Wednesday, down 8.39 points, or 0.28 percent from the previous trading day. [NEWS1]


Stocks retreated for a fourth consecutive session Wednesday as concerns over resurgences in virus cases in Europe and the United States cast doubts over a prompt recovery from the pandemic. The won fell against the dollar.

The Kospi closed below the psychologically important 3,000-point threshold for the first time in two weeks, led by losses in auto and tech shares.

The index posted a weak performance despite an overnight decline in U.S. Treasury yields as investors remained wary of spikes in coronavirus cases in major economies, including Germany, France and Italy.

"Local stocks received downward pressure from the economic lockdown measures in Europe and the potential strengthening of the U.S. dollar against the European currency," Daeshin Securities analyst Lee Kyung-min said.

The local currency closed at 1,133.6 won against the dollar, up 3.9 won from the previous session's close.