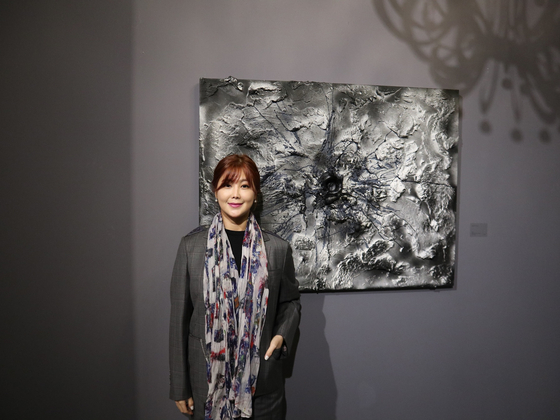 
Artist Kwon Ji-an, who is also active as singer Solbi, has donated all the proceeds from the sale of her painting “Just a Cake - Angel.” The painting sold at Seoul Auction for 10.1 million won ($8,900) on March 17.

Her agency M.A.P Crew confirmed Wednesday that Kwon donated all the money on Monday to Kyeong Dong Children Shelter in Suwon, Gyeonggi, where she had been volunteering for the past eight years.

“She’s been an angel for the children at the shelter for the past eight years,” said Shin Seung-joo, head of the shelter. “We send our appreciation to her. She is kind enough to remember every child’s names.”

Kwon said there have been ups and downs in her career as an entertainer, but she’s survived through it thanks to her fans and wants to share that love with those in need.

“I overcame a slump in life through art,” she said. “Art gave me a new life. By donating the earnings I made through art that’s like a gift to me, I am so thankful that I can engage in this small act of sharing. I cheer for children’s dreams.”

Kwon recently held an exhibit “Just a Cake - Piece of Hope” at Gallery Insa Art in Insa-dong, central Seoul, showcasing some 30 pieces that were all centered on cake. It was her first exhibit after she was embroiled in a plagiarism controversy last December. She posted a picture of a colorful cake with the caption “I made this cake in my own way,” which quickly came under criticism for plagiarizing artist Jeff Koons’ famous sculpture "Play-Doh."

Following the backlash, Kwon edited the post saying that her cake was inspired by Koons’ "Play-Doh" and was not for sale.