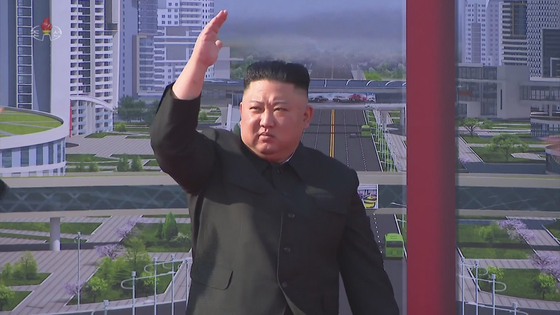 North Korean leader Kim Jong-un waves his hand during a ceremony to break ground for building 10,000 homes in Pyongyang in an image captured from state television. [YONHAP]


The United Nations Human Rights Council adopted a resolution condemning human rights abuses in North Korea for the 19th consecutive year Tuesday, while stressing the need for “timely assistance” to the vulnerable amid the Covid-19 pandemic.

The Geneva-based council passed without a vote the latest resolution, spearheaded by the European Union and co-sponsored by countries including the United States, Japan and Australia, in line with previous years’ resolutions calling out the systematic, widespread and gross human rights violations in the North and urging accountability by those responsible for the abuses.

South Korea, however, did not co-sponsor the resolution for the third year in a row. Seoul had previously co-sponsored North Korea rights resolutions from 2009 to 2018 but has kept low in recent years amid the government’s efforts to diplomatically engage Pyongyang.

South Korea’s Ministry of Foreign Affairs in a statement Wednesday said, “Our government participated in the adoption of this year's resolution by consensus, same as last year, in keeping with the basic position of working with the international community to substantively improve the human rights of North Koreans."

This year’s resolution emphasized the importance of allowing international organizations to access the country to ship necessary humanitarian equipment to support the vulnerable population amid the Covid-19 pandemic. It urged North Korea to open its border to allow the activities of humanitarian aid organizations “for the delivery of urgently required humanitarian goods such as food, medicines and agricultural supplies.”

It further expressed concern that the human rights situation in North Korea “may further deteriorate as a result of the global coronavirus” pandemic.

The resolution emphasized the urgency of the issue of the reunion of families separated during the 1950-53 Korean War.

It also included new text addressing concern over allegations of the violation of rights of prisoners of war who have not been repatriated and their descendants.

The latest resolution was passed after the Joe Biden administration put human rights at the forefront of its diplomacy and signaled it would come down harder on the North over its rights abuses, in a turnaround from the Donald Trump government.

Pyongyang on Tuesday through state media denounced the EU’s recent sanctions as a "political provocation.”