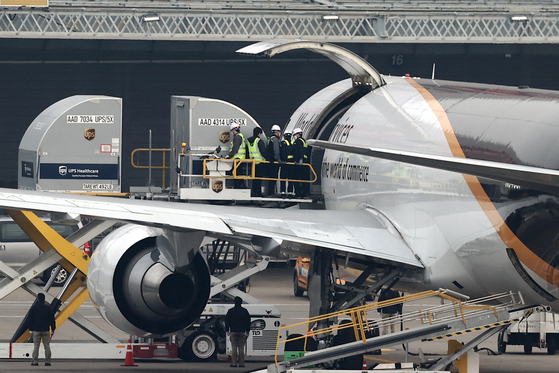 
Pfizer vaccines for 250,000 people aged 75 or over arrived at Incheon airport Wednesday.

They will be administered to the first group of Korea’s total population of people aged 75 or over, which numbers 3.64 million, starting April 1.

The vaccines are being shipped across the country in 15 refrigerated trucks as they need to kept at temperatures below negative 70 degrees Celsius (negative 94 degrees Fahrenheit).

Through a direct deal with the government, Pfizer will sell vaccines to cover 13 million people in Korea. A second batch of 250,000 courses -- each course is two doses -- will arrive by the end of March. Another 3 million courses will arrive around June, according to Korea’s health authorities.

After it began on Feb. 26, Korea’s vaccination program has focused so far on medical professionals and patients and staff at nursing homes, convalescent hospitals and other high-risk facilities.

People under the age of 65 were the first to get inoculated at these facilities. Since Tuesday, people 65 and older at the facilities started getting shots.

The shots for people 75 and older begin April 1. Anyone is eligible, even outside nursing homes or other kinds of facilities.

As of Tuesday, a total of 703,612 people in Korea had received their first shots. Both Pfizer and AstraZeneca vaccines, the two types being administered in Korea, require two shots per course. 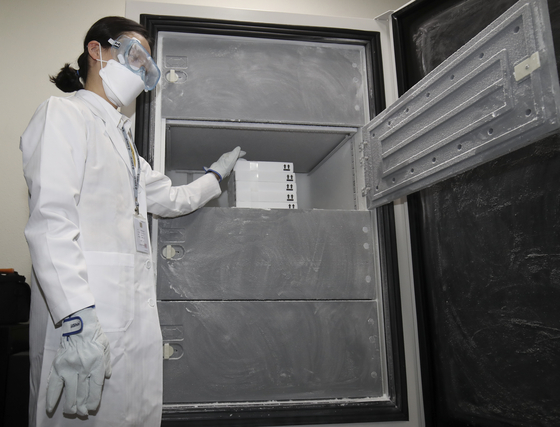 A medical staff member of a vaccination center in Ulsan stores Pfizer vaccines in a refrigerator on Wednesday. [NEWS1]

People 75 or over who want to get the vaccine need to sign an agreement at their nearest local government office that asks questions like: Do you want to be vaccinated? Can you visit the nearest vaccination center yourself? Will you allow your medical history being accessed before the vaccination?

“In cases where a person lives in a mountainous area that makes trips in and out of the area difficult, they will not be included in the coming round of vaccinations for people 75 or over,” said Kim Ki-nam, an official of the Ministry of Health and Welfare, in a press briefing on Tuesday. “They will be included in following rounds. They will be notified of updates.”

The vaccinations will be administered at 46 vaccination centers around the nation. By the end of April, there will be 221 more centers opened to administer the vaccines, according to the Ministry of the Interior and Safety.

Korea plans to have 70 percent of its population receive first shots by September and reach herd immunity by November.

There have been concerns about side effects.

“The Korea Disease Control and Prevention Agency [KDCA] has announced that people need not seek hospital care for slight fever or muscle pain after vaccinations,” said Yoon Tae-ho, a senior official of the Health Ministry. “But all vaccination sites will be ready for anyone who shows any sign of severe response to the vaccination.”

Severe side effect to vaccination may include anaphylactic shock, which usually occurs within 30 minutes.

Of the vaccinated in Korea, 9,819 reported having minor side effects such as headaches and nausea. 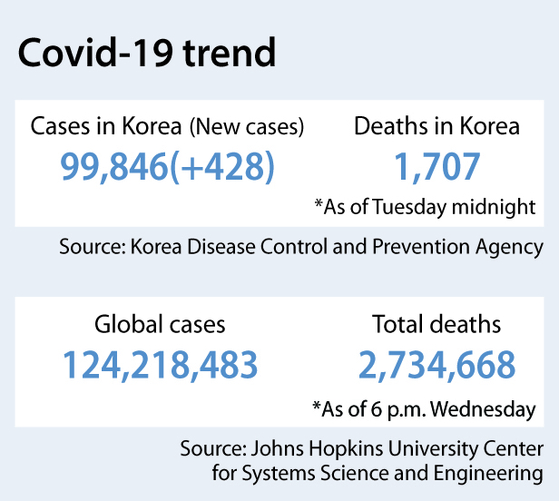 A total of 16 people have died following vaccinations as of Tuesday. The KDCA confirmed Monday that 15 of the deaths were not caused by the vaccinations. It is still investigating the remaining death.

Korea added 428 Covid-19 infections on Tuesday, of which 17 were imported. Among local cases, 135 were based in Seoul and 150 in Gyeonggi.
Korea’s daily additions have remained in the 400s for most of the past week.