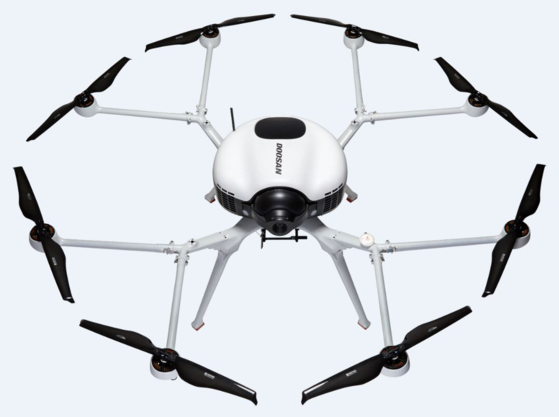 Posco International and Doosan Mobility Innovation will develop bipolar plates -- a core component in hydrogen fuel cell batteries -- for use in drones.

Bipolar plates, or separators, in fuel cell battery packs prevent hydrogen from coming into contact with oxygen and collect electricity produced from the cells.

Under an agreement signed Thursday, the two companies will collaborate on developing metal bipolar plates of 20 micrometers that could be used in hydrogen-fueled drones.

They will use Posco’s Poss470FC, a stainless steel sheet used in bipolar plates. Posco International’s subsidiary Posco SPS will be involved in the joint development.

A manufacturer of hydrogen-powered drones, Doosan Mobility Innovation worked with Posco SPS in the past to develop 50-micromoeter metal bipolar plates. That is the thinnest metal bipolar plate to date, the companies claim, half as thin as other products.

Hydrogen-fueled drones benefit from thinner materials as weight is a key consideration.

According to Posco, Doosan’s hydrogen-fueled drones can stay in the air two hours while drones with lithium-ion batteries can only fly 20 to 30 minutes. If the project succeeds, 20-micrometer bipolar plates may fuel demand for hydrogen power in various fields of aerospace mobility, it added.

“Posco SPS’s experience in bipolar plate technology and Doosan Mobility Innovation’s in drone architecture will create synergy to develop new technology that could be used in various mobility industries.”