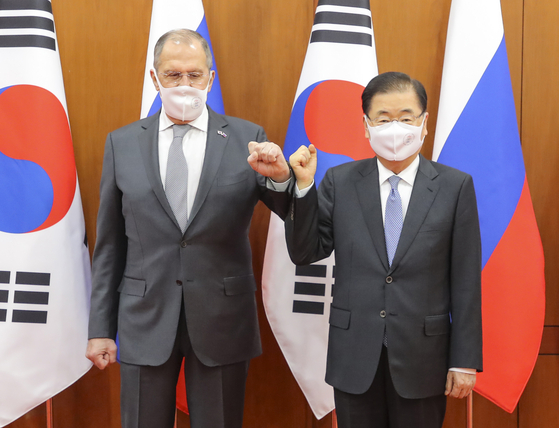 
Russian Foreign Minister Sergey Lavrov warned against an arms race and the strengthening of military activities amid escalated tensions on the Korean Peninsula and the Northeast Asia region in a statement after talks with his South Korean counterpart Chung Eui-yong Thursday.

Lavrov said in a press statement alongside Chung at the Foreign Ministry in central Seoul that the two countries shared the view that the “negotiation process between all concerned countries should resume as soon as possible in order to resolve all issues in the region.”

He added, “Special emphasis was placed on the importance of efforts to maintain peace and safety on the Korean Peninsula and in Northeast Asia. This includes the need for all concerned countries to give up on arm races and the strengthening of any kind of military activity.”

His remarks came shortly after North Korea launched what appeared to be two short-range ballistic missiles into the East Sea earlier that morning. It also follows a visit to Seoul and Tokyo by the U.S. secretary of state and Pentagon chief last week as Washington pushes for stronger trilateral cooperation with its East Asian allies amid intensified Sino-U.S. rivalry.

Lavrov made a two-day trip to Beijing earlier this week before arriving in Seoul Tuesday and told Chinese media that Russia-China relations are at "the best in their entire history."

Foreign Minister Chung said South Korea and Russia are “partners on a journey for peace and prosperity on the Korean Peninsula and in Eurasia,” in their bilateral talks Thursday morning.

This marked the first Korea-Russia foreign ministerial meeting held in Seoul since 2009, and the two sides discussed a range of bilateral issues, the Korean Peninsula situation and other regional matters.

Chung emphasized that Seoul and Moscow have been “together on the journey for lasting peace on the Korean Peninsula as strategic cooperation partners,” and asked for continued support from the Russian government for the peace process on the peninsula.

The two sides also agreed to work toward a visit to Seoul by Russian President Vladimir Putin once the Covid-19 situation subsides.

Lavrov in turn noted the strong and mutually beneficial cooperation between the two countries in various areas including security, economy, culture and education, and said South Korea "is one of Russia’s most important partners in the Asia-Pacific."

The two sides also discussed cooperation in health care including Covid-19 vaccines and said they will work toward overcoming the coronavirus pandemic.

A Foreign Ministry official said Thursday that Lavrov “praised Korea for its excellent quarantine measures and conveyed that Russia would like to share with Korea its accumulated experience in vaccine development,” noting that Russia’s Spunik V Covid-19 vaccine is produced by South Korean pharmaceutical companies.

Chung and Lavrov on Wednesday attended a ceremony marking the 30th anniversary of the establishment of diplomatic relations between Korea and Russia in 1990, an event attended by around 50 dignitaries of both countries in compliance with Covid-19 social distancing measures.

The event kicked off the year of mutual cultural and people-to-people exchanges between Korea and Russia with the slogan of, “The Future Built Together upon Friendship and Trust.”