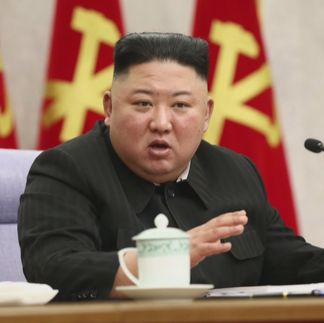 Judge Kim Yeong-soo, who presided over the trial at the Seoul Central District Court, ruled that the plaintiff, only identified by the surname Choi, was entitled to 50 million won ($44,000) in compensation from the North and Kim.

The court did not specify how it arrived at the compensation figure.

Choi's father, who was a police officer, was abducted from Hapcheon, South Gyeongsang in October 1950 by North Korean soldiers a few months after the North invaded the South. His fate remains unknown to this day.

Neither the North Korean government nor Kim Jong-un responded to the lawsuit.

The court deemed that the North had been served notice of the lawsuit, which Choi filed in December, and proceeded to hold the trial.

Choi is not alone in seeking damages from the North for events of the distant past.

The families of 13 abductees — many of them South Korean intellectuals and professors kidnapped to help the North rebuild after the war — are asking for 340 million won as reparations for allegedly systematic abductions, which have been denied by Pyongyang.

Before the court ruled in Choi's favor, a precedent had been established by a successful joint lawsuit filed by two octogenarian prisoner-of-wars (POWs), Han Jae-bok and Noh Sa-hong, who sued Kim Jong-un and were awarded 21 million won each last July for labor they performed in captivity.

The two former POWs escaped the North between 2000 and 2001, decades after their capture during the Korean War. Pyongyang repatriated only 8,726 South Korean POWs, in violation of the 1953 armistice.

In that judgement, presiding judge Kim Yeong-ah of the Seoul Central District Court ruled that North Korea was not a country according to the Constitution, which claims all of the Korean Peninsula as South Korean territory.

As such, the court ruled that sovereign immunity did not apply, and that the North's actions were subject to South Korean jurisprudence.

While there is little realistic chance that Choi or other plaintiffs can collect damages from the North Korean government or Kim Jong-un, there is a possibility they might recoup damages through North Korean assets in the South.

Following their successful lawsuit, Han and Noh requested that the Foundation of Inter-Korea Cooperation –– which since 2005 has collected royalties from South Korean companies using copyrighted North Korean materials on behalf of the North Korean state television service KCTV –– pay them the damages.

The foundation is led by Im Jong-seok, President Moon Jae-in's former Chief of Staff and current Special Advisor for Foreign Affairs and Special Envoy to UAE.

The accrued royalties, which totaled 1.6 billion won in 2018, are under court administration due to ongoing international sanctions against the North.

The court in Han and Noh's lawsuit seized 192 million won from the foundation –– equivalent to a year's worth of royalties that the foundation collects –– and ordered that the damages it awarded the two former POWs be exacted from that amount.

The foundation refused, arguing the royalties were destined for KCTV, not the North Korean state. The former POWs then filed a lawsuit against the foundation in the Seoul Eastern District Court, seeking an additional 85 million won.

The outcome of that lawsuit is still pending.