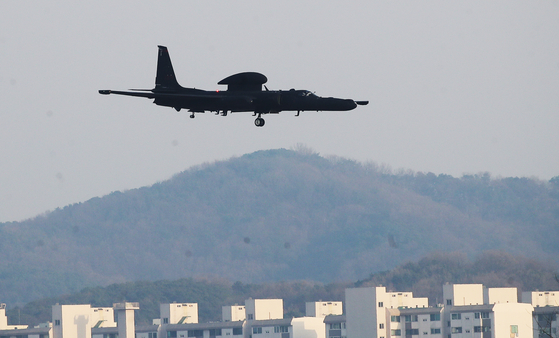 A U.S. Lockheed U-2S aircraft prepares to land at the Osan Air Base in Pyeongtaek, Gyeonggi, after conducting a reconnaissance mission Thursday. North Korea fired two short-range missiles into the East Sea earlier that day. [YONHAP]


North Korea fired two short-range missiles from South Hamkyong Province into the East Sea Thursday morning, just hours after the Pentagon warned Pyongyang against any provocations that could destabilize the peninsula.

The South Korean Joint Chiefs of Staff (JCS) said that two projectiles believed to be ballistic missiles were fired from Hamju County in South Hamgyong Province at 7:06 a.m and 7:25 a.m. and flew around 450 kilometers at an altitude of 60 kilometers.

Ballistic missiles are banned under UN Security Council resolutions, and if confirmed, this would mark the first launch of ballistic missiles since the Joe Biden administration was sworn in last January.

The JCS said, "Our military is keeping a full readiness posture with heightened monitoring and vigilance under close South Korea-U.S. coordination." It added that that South Korean and U.S. intelligence authorities were conducting a detailed analysis.

It was not known whether North Korean leader Kim Jong-un supervised the latest launches, as he has in the past.

North Korea last fired short-range ballistic missiles one year ago off its east coast from Wonsan in South Hamkyong Province on March 29, 2020. They were assessed as having been fired from transporter erector launcher (TEL) vehicles.

The NSC convened a 90-minute emergency meeting led by Suh Hoon, director of the Blue House National Security Office, Thursday morning to discuss the missiles launches and to review the security situation on the Korean Peninsula.

South Korean Foreign Minister Chung Eui-yong in a press conference alongside his Russian counterpart Thursday said that Seoul "expressed deep concern that North Korea launched a projectile appearing to be short-range ballistic missiles amid various efforts made by the South Korean government to achieve the goal of complete denuclearization of the Korean Peninsula at an early date." 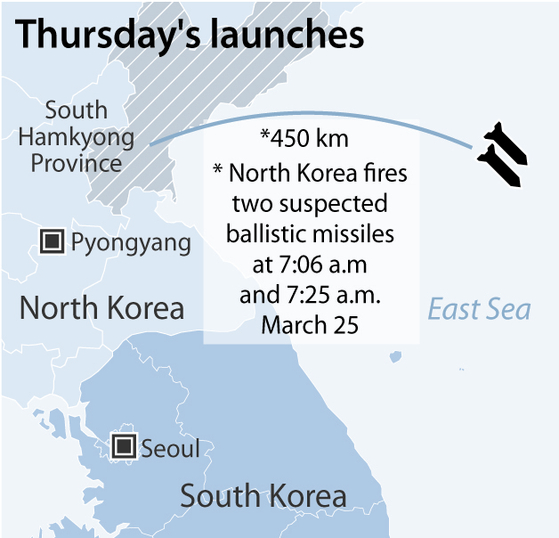 Chung urged the North to "continue to join in our efforts to build a peace settlement and a Korean Peninsula free of nuclear weapons and nuclear threats, as agreed in the South-North leaders' summit in September 2018."

After a meeting of Japan's National Security Council Thursday morning, Japanese Prime Minister Yoshihide Suga strongly protested the North's missile launches, saying they pose "a threat to the peace and safety" of the region and called them a violation of UN Security Council resolutions.

Just three hours before the North's latest missile launches, the U.S. Defense Department called on Pyongyang to refrain from actions that would add to instability on the Korean Peninsula.

"We want to see North Korea denuclearize," said John Kirby, the Defense Department spokesman, at a briefing at the Pentagon Thursday. "We want to see stability and security on the peninsula, and denuclearization is a key part of that."

He added, "Obviously, we call on Pyongyang not to do things that would make things less stable on the peninsula."

When asked by a reporter about the cruise missiles fired by the North on Sunday, Kirby noted that the White House downplayed those launches, calling them "in the realm of normal military activity."

Pyongyang's latest provocation comes as the Biden administration is in the final stages of its comprehensive review on North Korea policy.

Suh is set to meet with U.S. National Security Adviser Jake Sullivan and their Japanese counterpart Shigeru Kitamura in the United States next week to discuss the review on North Korea policy.

The South Korean Ministry of Foreign Affairs confirmed that it has been consulting with U.S. counterparts on measures to respond to the North's latest missile test.

In a briefing Thursday afternoon, Choi Young-sam, spokesman for Seoul's Foreign Ministry, said, "We will strengthen consultations with related countries on future responses based on close South Korea-U.S. cooperation."

Pyongyang could have been trying to send Washington a message ahead of U.S. President Joe Biden's first press conference since he took office Thursday, according to Seoul intelligence officials.

A South Korean Foreign Ministry official said, "The 15-member UN Security Council could respond in various ways… but looking at past cases, there doesn't seem to be a high likelihood at the moment that sanctions will be imposed over short-range missiles."

Kim Yo-jong, the powerful younger sister of the North Korean leader, cautioned the Biden administration to "refrain from causing a stink at its first step" in a statement on March 15. She also said Pyongyang could scrap the inter-Korean military pact of 2019.