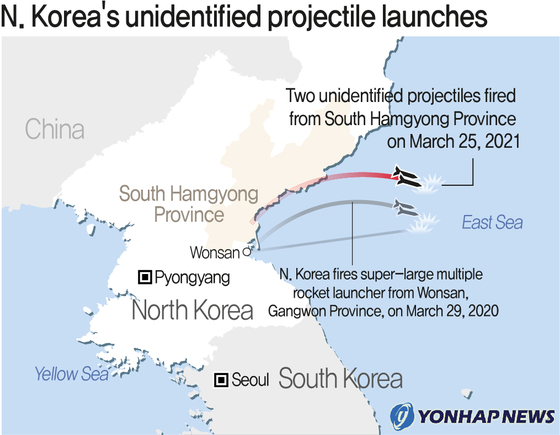 North Korea fired two short-range missiles from South Hamkyong Province into the East Sea Thursday morning, just hours after the Pentagon warned Pyongyang against any provocations that could destabilize the peninsula.

The South Korean Joint Chiefs of Staff (JCS) said that two projectiles believed to be ballistic missiles were fired from Hamju County in South Hamgyong Province at 7:06 a.m and 7:25 a.m. and flew around 450 kilometers at an altitude of 60 kilometers.

Ballistic missiles are banned under UN Security Council resolutions, and if confirmed, this would mark the first launch of ballistic missiles since the Joe Biden administration was sworn in last January.

The JCS said, “Our military is keeping a full readiness posture with heightened monitoring and vigilance under close South Korea-U.S. coordination."

It added that that South Korean and U.S. intelligence authorities were conducting a detailed analysis.

It was not known whether North Korean leader Kim Jong-un supervised the latest launches, as he has in the past.

The NSC convened a 90-minute emergency meeting Thursday morning to discuss them and to review the security situation on the Korean Peninsula, according to the Blue House.

Just three hours before the North’s latest missile launches, the U.S. Defense Department called on Pyongyang to refrain from actions that would add to instability on the Korean Peninsula.

"We want to see North Korea denuclearize,” said John Kirby, the Defense Department spokesman, at a briefing at the Pentagon Thursday. “We want to see stability and security on the peninsula, and denuclearization is a key part of that.”

He added, “Obviously, we call on Pyongyang not to do things that would make things less stable on the peninsula.”

When asked by a reporter about the cruise missiles fired by the North on Sunday, Kirby noted that the White House downplayed those launches, calling them “in the realm of normal military activity.”