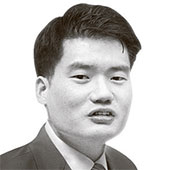 
“What? Politicians are not allowed to attend? Well, the authorities must hold the event, but they are obviously reluctantly holding it.”

The voice of Lee Sung-woo, head of the group representing relatives of victims of the Cheonan tragedy, was full of emotion over the phone on Tuesday. He was venting his grudge at military authorities and trying to suppress his anger.

The Moon Jae-in administration decided not to allow politicians to attend the West Sea Defense Day event and the 11th memorial on Friday of the Cheonan sinking. Only seven politicians have been invited, including the heads of the five political parties and the chairpersons of the National Defense and Political Affairs Committees in the National Assembly. The opposition will be represented by only two, People Power Party (PPP) interim leader Kim Chong-in and People’s Party Chairman Ahn Cheol-soo.

The Ministry of Patriots and Veterans Affairs did not inform the families of its plan to scale down the event. Lee Sung-woo, first realized the situation when I called him Tuesday. There was a rumor in the National Assembly that the government planned to downsize the event. So, Rep. Han Ki-ho, a PPP lawmaker and member of the Defense Committee, called the Minister of Veterans Affairs and demanded that at least his committee members be allowed to attend the memorial. Minister Hwang Ki-chul said he got the message. Then, all of a sudden, a director-level official from the ministry called Rep. Han and said that due to Covid-19 restrictions and the size of the space, they would not be able to attend. Rep. Shin Won-sik, a PPP lawmaker and Defense Committee member, claimed that Minister Hwang wanted to have the opposition members attend the event, but that he had to follow an order from the Blue House not to invite them. 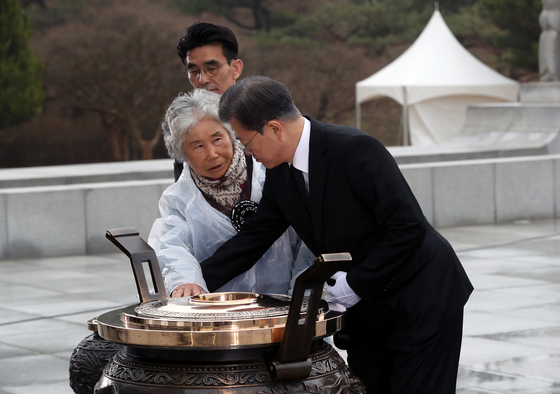 A mother of a South Korean Navy sailor who died in the 2010 Cheonan sinking approaches President Moon Jae-in, May 27, 2020 to demand an answer about who sunk the corvette on the West Sea. [JOINT PRESS CORPS]

After outraged PPP lawmakers inquired, the military explained that politicians are not allowed to visit military camps during campaign periods after guidelines on politicians’ visits were fixed last December ahead of the April 7 mayoral by-elections in Seoul and Busan. What does mourning the soldiers who died while defending the West Sea have to do with the elections? Last year, the Cheonan memorial ceremony was held at the Second Naval Fleet Command on March 26, 20 days before April 15 parliamentary elections. At that time, politicians could attend without any restrictions. Cheonan memorial ceremonies were often held shortly before elections in the past, and politicians never turned away. There was no controversy over memorial services influencing elections.

The Navy is suspected of misrepresenting the relatives of the victims. Former lawmaker Yoo Seong-min, who attended all memorial events, claimed that in the early days of the Moon administration, he told the Navy that he would attend the second Yeonpyeong Naval Battle memorial ceremony, and was told that the families did not want him to attend. Later, he attended an event hosted by the families and asked the wife of late Sgt. Han Sang-koo, “I heard families didn’t want my attendance.” The wife denied the accusation. Yoo claims that the Navy lied to prevent him from attending the event and also downsize it.

President Moon passed on the West Sea Defense Day event twice, first due to a trip to Vietnam and second due to a visit to Daegu. He did not attend the memorial ceremony for the patriots who died for the country, and first attended the event last year. Some said that he was conscious of the parliamentary elections because it was 20 days before. In the memorial speech last year, Moon did not mention North Korea at all. Attendees were bewildered as the speech was filled with abstract words such as solidarity, cooperation and patriotism. Yoon Cheong-ja, 76, one of the relatives, was frustrated and approached Moon. She cried out, “People say they don’t know who’s responsible for the Cheonan sinking. My heart is broken. As president, you must relieve my grudge.” Moon quietly reassured her, saying that the government’s official position is unchanged that North Korea was responsible.

On the Cheonan sinking, Moon first officially called North Korea responsible in 2015, when he became party leader. He did not mentioned the Cheonan incident publicly until he was pressed by the family three years after his inauguration in 2017. When North Korea sent Kim Yong-chol, then vice chairman of Central Committee of the Workers’ Party and mastermind of the sinking of Cheonan, to attend the 2018 PyeongChang Olympics, he was treated as a state guest.

On the unprecedented decision to downsize the Cheonan memorial event, former PPP lawmaker Yoo said, “The true intention must be to have the smallest possible event because not having an event would be criticized by the general public and North Korea has to be taken into account.” I hope his assumption is not true.