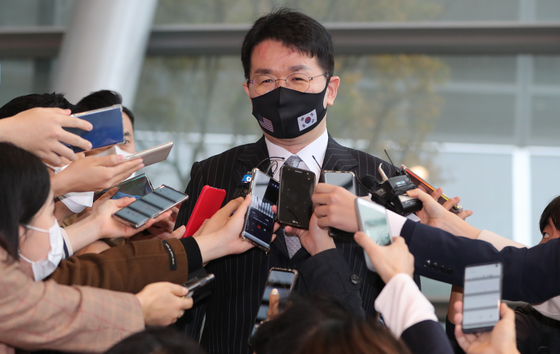 
Hanjin Group Chairman Cho Won-tae has been reappointed a director of Korean Air Lines despite the disapproval of the National Pension Service (NPS), a major shareholder.

Cho was reappointed at a shareholder meeting held at the company’s headquarters in Gangseo District, western Seoul, on Friday. Shareholders holding 56.91 percent of the company’s common stock took part in the vote and Cho's appointment was approved by 82.84 percent.

The NPS, which own 8.52 percent of Korean Air Lines, voted against Cho’s reappointment because it does not approve of Cho's decision to acquire Asiana Airlines without doing due diligence, according to local media reports.

Cho had the support of Hanjin KAL, which, with its allies, own 30.96 percent of Korean Air Lines.

“The company decided to acquire Asiana Airlines to overcome the crisis in the airline industry and to secure growth,” said Cho in a statement. “The acquisition process is progressing smoothly.”

Cho did not attend the shareholder meeting.

Korean Air Lines announced it would acquire debt-laden Asiana Airlines with the help of the state-run Korea Development Bank in November.
BY JIN MIN-JI [jin.minji@joongang.co.kr]