The number of Koreans raising pets is nearing 15 million, nearly a quarter of the entire population.

The statistics were based on a survey conducted by KB Management Institute under KB Financial Group on 2,000 households, including 1,000 households with pets, for three weeks from Dec. 18 last year. The results were published earlier this month.

According to the report, 14.48 million Koreans, or 6.04 million households in Korea, are raising pets. Over half of the households raising pets are in the greater Seoul area. 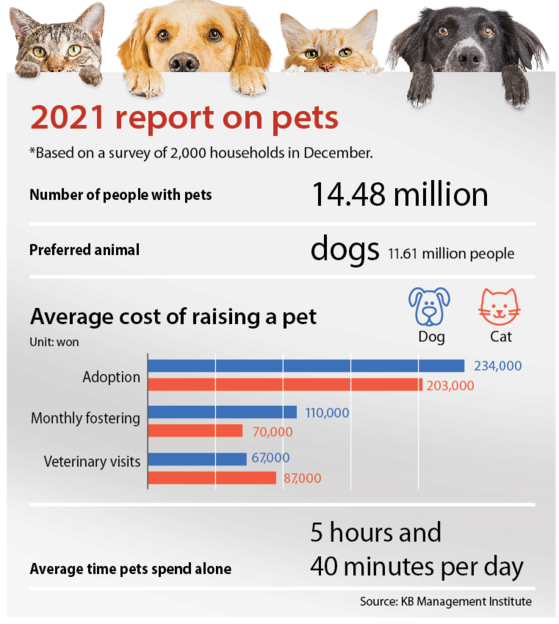 Over 80 percent of the households with pets were raising dogs, while the second most common pet in Korea, cats, came in with 25.7 percent. Ornamental fish, hamsters, birds and rabbits were also popular pets.

The buzzword combining pet and technology refers to devices equipped with top-notch technology that helps owners look after their pets more easily.

The most popular item was an automatic pet feeding machine, with 39.4 percent of households with pets saying they use it. Just over 30 percent of the households said they use home security cameras to help them monitor pets while they're away, and 26 percent said they bought electronic toys specially designed for pets.

The devices are mostly there to help households look after pets even when they are not home.

According to the report, pets spend on average 5 hours and 40 minutes alone at home. This is 23 minutes less than the time pets used to spend home alone in 2018, as more people stayed in for social distancing because of the coronavirus pandemic.

More families are raising older dogs, as the average lifespan of dogs has become longer. Older dogs were considered to be 10 years or older.

Survey results showed dogs suffered the most from eye-related diseases, followed by skin and teeth problems.

Koreans' most popular companion dog was the maltese, followed by the poodle and pomeranian. The most common dog names were Coco, Bori and Choco.

Koreans' favorite companion cat breed was the Korean shorthair. The Russian blue and Persian breeds were also popular. The most common cat names included Coco, Bori and Momo. People tended to prefer two syllable names that were easy to call.