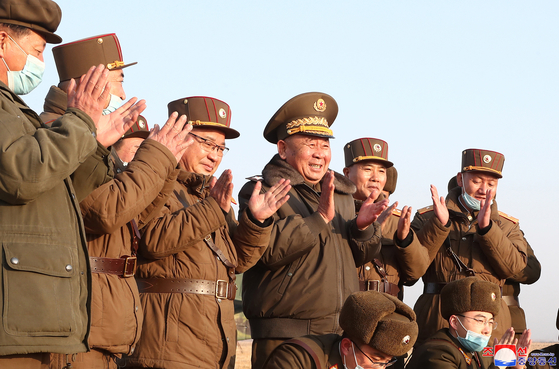 
Pyongyang said through state media Saturday that U.S. President Joe Biden's criticism of its recent ballistic missile launches was a "provocation" and the wrong "first step," warning of possible future consequences depending on Washington's approach.

In response, Ri Pyong-chol, a secretary of the Central Committee of the North's ruling Workers' Party, said in a statement released by the North's official Korean Central News Agency (KCNA) Saturday, "We express our deep apprehension over the U.S. chief executive faulting the regular testfire," calling out the American president in person.

He added that Biden's remarks calling the North's latest launches a "violation" of UN Security Council resolutions openly revealed "his deep-seated hostility toward the DPRK," referring to the acronym for the country's official name, the Democratic People's Republic of Korea.

"Such remarks from the U.S. president are an undisguised encroachment on our state's right to self-defense" and a "provocation to it," said Ri, also a vice chairman of the Central Military Commission and member of the Presidium of the Political Bureau, who supervised Thursday's missile launches rather than North Korean leader Kim Jong-un.

He said, "I think that the new U.S. administration obviously took its first step wrong," warning that if the "U.S. continues with its thoughtless remarks without thinking of the consequences, it may be faced with something that is not good."

Ri was echoing the language used by Kim Yo-jong, the powerful younger sister of the North Korean leader, who on March 15 cautioned the Biden administration to "refrain from causing a stink at its first step."

The South Korean Joint Chiefs of Staff (JCS) said that two projectiles believed to be ballistic missiles were fired from Hamju County in South Hamkyong Province Thursday morning and flew around 450 kilometers (280 miles) at an altitude of 60 kilometers.

According to the KCNA, the "newly-developed" tactical guided missiles accurately hit a target set in waters 600 kilometers off the east coast of the Korean Peninsula, further than the JCS estimate. It described the new tactical guided projectile as a weapons system with a 2.5-ton warhead that uses the "core technology" of an already developed missile.

Experts point out this new-type missile could be an upgraded version of the North's KN-23 short-range ballistic missile, similar to the Russian-made Iskander mobile missile system. This variant was unveiled in a military parade in Pyongyang in January.

The Academy of Defense Science, which conducted Thursday's test and is at the center of the North's missiles program subject to U.S. sanctions, in a KCNA report Friday called the launches "very successful" and claimed that "the reliability of the improved version of solid fuel engine was confirmed through several engine ground jet tests and their test-firing processes." 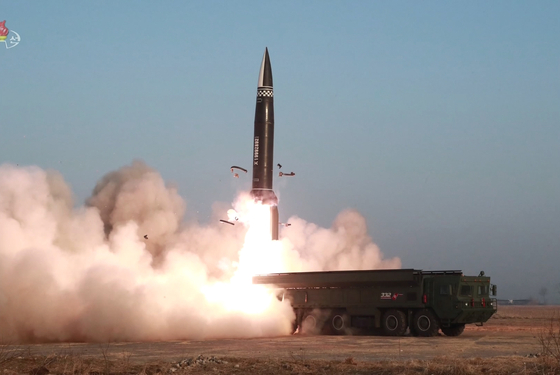 Ri in his Saturday statement said that it was "gangster-like logic" that the United States can deploy "strategic nuclear assets into the Korean peninsula and launch ICBMs [intercontinental ballistic missiles] any time it wants" but not allow North Korea to "conduct even a test of a tactical weapon." He went on to warn that North Korea will continue to work to increase its "overwhelming military power."

Biden confirmed that UN Security Council resolutions were violated after North Korea fired two short-range ballistic missiles and told reporters at the White House Thursday, "Let me say that, number one, UN Resolution 1718 was violated by those particular missiles that were tested."

Resolution 1718 was adopted by the Security Council in October 2006, days after Pyongyang conducted its first nuclear test, and bans North Korea from conducting nuclear tests and ballistic missile launches.

When asked what action the United States will take in response to the launches Thursday, Biden replied, "There will be responses — if they choose to escalate, we will respond accordingly."

He added, "But I'm also prepared for some form of diplomacy, but it has to be conditioned upon the end result of denuclearization."

The Biden administration is in the final stages of a comprehensive review of its North Korea policy and consulted South Korea and Japan on the issue during the U.S. secretary of state and Pentagon chief's visit to East Asia last week. U.S. National Security Adviser Jake Sullivan will host Suh Hoon, director of the Blue House National Security Office, and their Japanese counterpart, Shigeru Kitamura, in Washington this week to further discuss North Korea strategy.

The Biden administration has signaled it could possibly increase its pressure to get North Korea to return to denuclearization talks and improve the human rights situation in the country, but also indicated it has been working on engagement, including reaching out to Pyongyang through diplomatic channels last month.

Pyongyang's first provocation since the launch of the Biden administration in January could have been timed to send a message ahead of the new president's first press conference.

North Korea fired two short-range cruise missiles off its west coast into the Yellow Sea, the JCS confirmed last Wednesday, but the White House downplayed the launches. Cruise missiles do not violate UN Security Council resolutions as they are unmanned vehicles that are propelled by jet engines rather than rockets.

Biden brushed off the news of the cruise missile launches Tuesday and told reporters, "There's no new wrinkle in what they did."

However, Cho Yong-geun, director of North Korea policy at the South Korean Defense Ministry, and David Helvey, acting assistant secretary of defense for Indo-Pacific affairs, in a phone conference Friday expressed "deep concern" over the recent missile launches, and "stressed that the North's ballistic missile and nuclear weapons programs pose serious threats to peace and stability of Northeast Asia and beyond."

President Moon Jae-in in a speech Friday said in response to the North's launches, "Actions that make the mood for dialogue difficult are undesirable."

He spoke at a ceremony marking the sixth anniversary of the Yellow Sea Defense Day at the South Korean Navy's 2nd Fleet Command in Pyeongtaek, Gyeonggi.

"I am well aware that the public is greatly concerned over North Korea's missile test-firing yesterday," said Moon. "Now is the time for South and North Korea and the United States to all work toward continuing dialogue."

The Yellow Sea Defense Day commemorates over 50 service members who sacrificed their lives over the past two decades defending against North Korea's provocations near the Northern Limit Line (NLL) in the Yellow Sea — a naval skirmish near Yeonpyeong Island in June 2002, a torpedo attack sinking the South's Cheonan warship in March 2010 and the deadly shelling of the Yeonpyeong Island in November 2010.