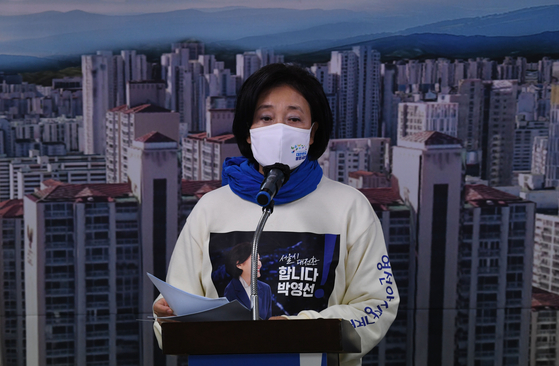 Park Young-sun, candidate of the ruling Democratic Party in the Seoul mayoral by-election on April 7, speaks at a press briefing in Jongno District, central Seoul, on Sunday, regarding her real estate and housing policy plans. [JOINT PRESS CORPS]

Park Young-sun and Oh Se-hoon, rival candidates in the Seoul mayoral by-election to be held in 10 days, have been focusing on real estate policy in recent days on the campaign trail.

“My plan is to renovate the section of the Gyeongbu Expressway that passes through the Seocho District so that it will run underground instead, to yield space above ground that can then be transformed into a 50,000-pyeong [1.8 million square feet, or 40 acres] area of lush green space and another 50,000-pyeong area of affordable apartments,” Park told her supporters in a campaign speech near the Seoul Express Bus Terminal in Seocho on Sunday. “The apartments will be provided at much more affordable prices, at some 10 million won [$890] per pyeong.”

Pyeong is a measurement used for real estate in Korea, with one pyeong measuring about 3.3 square meters (35 square feet). The average price of apartments in the Seocho District per pyeong was around 64.59 million won last month, according to KB Kookmin Bank’s real estate app Liiv On.

Park, a former SMEs minister and the candidate of the ruling Democratic Party, added that if she is elected, she will help scrap the law that limits the height of buildings near Mount Namsan.

“I think there is room for a change here, so that we can build buildings higher than 35 floors in the area and still not hurt the beautiful skyline of the Namsan area, and at the same time provide more housing with higher buildings,” Park said.

Seoul city government restricts the height of apartments in Seoul to 35 floors. 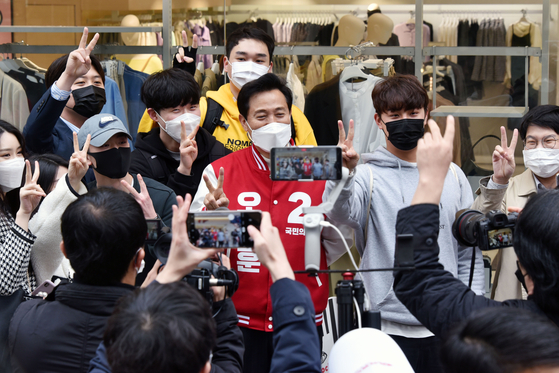 Oh Se-hoon, candidate of the main opposition People Power Party for the Seoul mayoral by-election pose with his supporters in Garosugil area of southern Seoul on Sunday. [JOINT PRESS CORPS]

“I intend to create a sports dome in Chang-dong [of Nowon District, northern Seoul,] and a mega shopping complex like Starfield in the area as well,” Oh told Yonhap News on Sunday. “The area is large enough that on top of all this, I intend to also build a biomedical hub there. This way, we will be able to create a fourth downtown in Seoul, in addition to the central part of the city, Gangnam and Yeouido.”

Oh has also pledged to provide an additional 360,000 housing units in Seoul if he is elected.

The mayoral by-election is slated for April 7. The winner will serve for one year, to complete the term of Park Won-soon. Park took his own life a day after his former secretary reported him to police for sexual harassment.

Don’t do anything, please