Gwangju sees parallels between May 18th movement and Myanmar

Gwangju sees parallels between May 18th movement and Myanmar 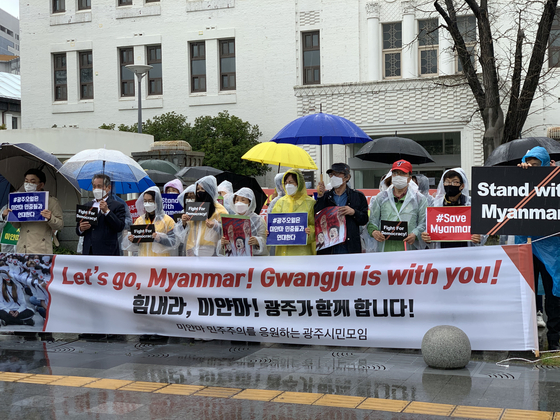 Citizens of Gwangju hold a rally supporting democracy in Myanmar in May 18 Democracy Square in Gwangju, South Jeolla on Saturday. [SEO JI-EUN]


To many people in Korea's city of Gwangju, recent scenes from Myanmar are reminiscent of their own experiences 41 years ago, in May 1980.

Despite the gloomy weather on Saturday, more than 100 people gathered in the May 18 Democracy Square, or at the Old South Jeolla Provincial Office, where the democratization movement took place. They held portraits of the victims of the protests in Myanmar, and tied red ribbons around their wrists, all wishing for democracy in Myanmar.

Among those gathering were students, monks and Burmese people, and some people who experienced the democratic uprising in 1980. Mass protests have taken place in Myanmar since the military seized control of the country in February.

"When we see Myanmar, it is like we are watching a video of Gwangju 41 years ago," said Yoon Chung-ja, the head of May Democracy Women's Organization.

Yoon herself is one of the survivors of the military suppression of the democratic movement.

The Gwangju movement began on May 18, 1980 when residents staged an uprising against the military regime of Chun Doo Hwan, who seized control of the country in a military coup on Dec. 12, 1979. For nine days, the citizens of Gwangju confronted the military but were ultimately crushed.

Yoon, then 22-year-old, made riceballs with other women and high school girls in the situation room in the provincial office. Because it was a simple and easy meal, they made and distributed it to citizens who were suffering from hunger. But Yoon lost her friend, who died in the suppression by the military on the last day of the uprising.

"My friend didn't have a coffin, and I looked for her for years but couldn't find her. The family continued to fight and at the end, it was found that she was loaded into a car and was buried in a hole.

"This kind of event is happening in Myanmar, and it's terrible. I don't even want to remember, but it's been 41 years since my friends died while I survived. Because we are survivors, we cannot stay still while watching Myanmar undergo the things that happened 41 years ago."

After Yoon spoke with Hwang Jeong-ah, the head of Gwangju Asia Sisterhood, the two organizations came together and discussed ways they can help, and came up with the idea of Myanmar's protest of banging pans.

"One day I saw the Burmese citizens, especially the mothers and students, banging pots in the roads," said Yoon.

"Pan protests have a bigger meaning than we think," said Hwang. "It has become a symbol of resistance, but because it is not allowed in Myanmar, we are doing it to repel the bad coup d'état forces."

Besides the women's organizations, the civic groups in Gwangju are helping Myanmar in their own way.

The May 18 Memorial Foundation called in civil society organizations to form the Gwangju Myanmar Solidarity on March 11.

"In fact, we had a long relationship with Myanmar," said Lee Ki-bong, the secretary general of May 18 Memorial Foundation.

"There's been democratic movements in Myanmar before in 1988 and 2007, so we had a sense of comradeship. We awarded the Gwangju Prize for Human Rights to Aung San Suu Kyi in 2004 and to Min Ko Naing in 2009, and they both visited Gwangju in 2013. We have been in solidarity for democracy since early 2000."

As the cruelty of the military increased, civic groups constantly raised voices that Gwangju society should do something, and they held an emergency meeting on March 3.

"In terms of 'Gwangju' as a whole, there were opinions of holding a meeting to give a helping hand and not just sitting back and seeing Myanmar experiencing a similar situation. We contacted civic groups to create a solidarity organization and had a meeting on March 11 in the conference room of the provincial government building. Despite the coronavirus pandemic, the conference room became full. It turned out that everyone was feeling sympathetic and felt that Gwangju should do something."

With citizens and civic groups of Gwangju, Gwangju Myanmar Solidarity is undertaking various activities, including protests at the Myanmar embassy, urging the dispatch of medical teams and demanding Korean companies such as Posco cut business ties with Myanmar's military-owned companies.

They also started a fundraising campaign, which accumulated fifty million won [$44,189] in two weeks from more than 600 people and organizations, according to Lee.

Gwangju artists joined by holding art and photo exhibitions, and the poets and writers of Gwangju started publishing poems in newspapers to inform and seek solidarity with Myanmar.

Middle school students of Gwangju held a charity bazaar on Saturday after the rally, and donated 994,890 won [$879] to the group.

Cha Myeong-sook, who took to the streets during the Gwangju uprising and called out to the demonstrators, came to the rally wearing a T-shirt with the phase "Everything will be OK," matching the T-short worn by Kyal Sin, a 19-year-old Burmese killed during the protest on March 3.

"They will try to abolish all the evidence and distort the history. But justice is always on truth's side, and Gwangju and Korea will strongly support and send hundreds and thousands of messages. We won't stop. We are sending courage to Myanmar," said Cha.

"I am so thankful for Koreans fighting for democracy [of Myanmar]," said Ye Naing, a 26-year-old Burmese in Gwangju who participated in Saturday's rally. "Because we [Burmese] cannot go to Myanmar, we're trying to help from here. With South Koreans helping, I think Myanmar can achieve democracy quickly."