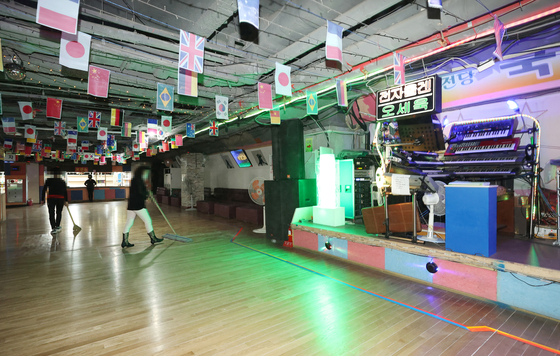 An indoor dance hall in Jongno District, central Seoul, on Oct. 12, 2020. Employees are getting the space ready for business. [YONHAP]

“The ban on food consumption in these places will remain regardless of the social distancing level,” Sohn Young-rae, a senior-ranking official of the Ministry of Health and Welfare, said during a press briefing Friday. “Simply put, food consumption at any non-dining facility will be banned.”

Exceptions can be made for food consumption at these facilities only if they have restaurants that have taken preventive measures, such as placing plastic dividers on tables or separating the tables and seats to ensure some 2-meters (6.5 feet) of distance between each guest.

“There can be cafes or restaurants inside libraries,” Sohn said. “Some of these restaurants would have taken measures such as placing the plastic dividers on table. In such cases food, consumption could be allowed."

Under Level 2, restaurants, cafes, gyms, noraebang, dance halls and bars, including those that allow dancing, have to close by 10 p.m. Under Level 1.5, these facilities can remain open beyond 10 p.m.

An exception is made to the rule for meetings between the families of the bride-to-be and groom-to-be, also called sanggyeonrye in Korean, in which case up to eight people can meet. The same exception also applies to family gatherings involving infants.

“When the government extended the social distancing guideline last time, it did so with hopes to see the daily cases drop to around the 200 level,” Sohn said during the press briefing on Friday. “Growing clusters in the regions outside of the greater Seoul area seem to be contributing to the cases there, whilst in the greater Seoul area we are seeing more of a widespread infection within local communities. The latest ban on food consumption at certain facilities is intended to curb the current rate of coronavirus infections.” 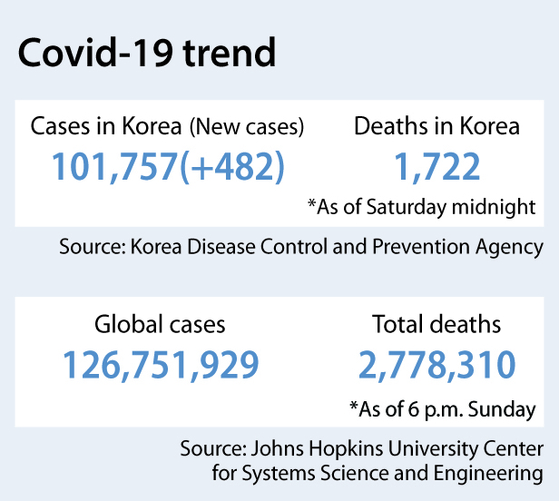 Korea added 482 Covid-19 infections on Saturday, of which 20 were imported. Of the local cases, nearly 70 percent were in the greater Seoul area, with 135 in Seoul, 32 in Incheon and 150 in Gyeonggi. Since late February, Korea’s daily case level has been mostly in the 300s and 400s.

Some popular sites in Seoul for cherry blossom viewing will be off-limits this week over coronavirus concerns.

The popular 1-mile street on Yeouiseo-ro in Yeouido, western Seoul, will be controlled by authorities. Only 3,500 people who have registered in advance will be allowed in, from April 5 to 11, from 11 a.m. to 9:30 p.m. The street will be closed at other hours. Registration can be made at https://blossom.or.kr from 10 a.m. on April 1.

The popular walkway around the Seokcheon Lake in Songpa District, southern Seoul, will remain closed through April 12. Songpa District Office recommended taking advantage of other trails in the area including the Seongnaecheon Trail, which is near the Olympic Park, and the Jangjicheon Trail, which is located near the Garak Market, where cherry blossom trees are planted in a scattered manner and can be enjoyed more safely.

Korea started its vaccination program on Feb. 26. As of Saturday, 793,858 people have been vaccinated with their first shots in Korea. These are mostly patients and medical workers at high-risk facilities, such as nursing homes for the elderly and convalescent hospitals, as well as medical workers at hospitals focusing on Covid-19 care.

Starting April 1, members of the general public aged 75 or over will be eligible to be vaccinated. Korea plans to have 70 percent of the country inoculated with one shot in the two-shot regimen by September and reach herd immunity by November.