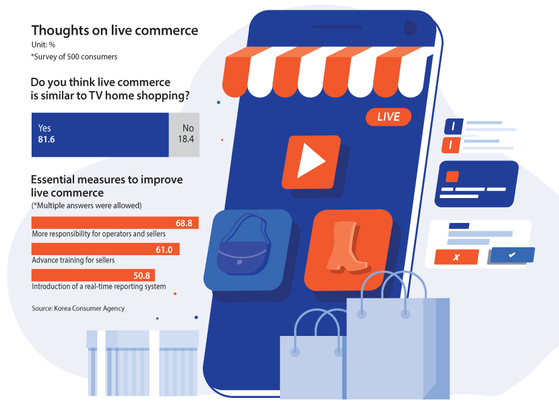 “This body cream helps reduce swelling and remove cellulite,” or so said the announcer during a live commerce infomercial streamed on the internet.

The statement, like many by live commerce spokespeople, has been found to be exaggeration by the Korea Consumer Agency.

In live commerce, viewers can communicate with the hosts via messaging programs, making it like home shopping but real time and interactive.

The new retail trend is booming, mainly driven by young consumers who are comfortable with mobile phones and videos and whose shopping patterns fit the concept of live commerce.

Many Korean companies, regardless of their products, are now jumping into live commerce. Naver, the first mover, started Selective early last year. The company changed its name to Shopping Live in July and has been expanding the service.

Besides IT companies, others are getting into game, including SK Telecom, KT, Coupang and Baedal Minjok.

The market size of live the commerce service market, which was some 400 billion won ($353.12 million) last year, is estimated to be about 2.8 trillion won this year, according to Kyobo Securities research center. It is expected to reach some 10 trillion won by 2023.

The Korea Consumer Agency on March 15 released a report detailing problems with live commerce. The agency reviewed some 120 live commerce shows from five live commerce platforms, and of them, 30 made exaggerated claims or misled viewers.

These include a show that promoted a massager was supposed to help eliminate body waste, and a show that advertised a body steamer was said to be helpful with anti-aging and strengthening metabolism. The information exaggerated, according to Korea Consumer Agency.

As live commerce shows can be delivered via many different types of online platforms, they cannot be easily monitored or managed by the government or other organizations that aim to protect consumers.

Even if consumers find out that they were fooled by those exaggerated advertisements, canceling orders or requesting refund is not an easy process.

Under the Act on the Consumer Protection in Electronic Commerce, TV home shopping is required to allow customers to cancel their orders, to give full refunds and pay proper compensation when their products and services cause harm.

But the law exempts live commerce as it is a “mail order distributor providing mail order brokerage between persons.”

The National Assembly Research Service on March 16 released a report discussing the issues and future challenges of live commerce. The report points out the necessity of tightening regulations on live commerce in order to protect consumers from damages.

“Live commerce is problematic in that it’s unclear who is responsible for damages,” said Kim Yeo-ra, legislative research officer at National Assembly Research Service’s Science, Media & Telecommunications Team. “As there are no regulations restricting the host’s words and expressions during live commerce shows, exaggerated or false claims are a risk.”

“Many young people or teenagers use mobile devices. Indiscriminate commercial content may cause damages,” Kim added.

“Live commerce platforms actually play a part in the transaction process with consumers such as accepting orders and offering delivery,” said a spokesperson for the Fair Trade Commission. “But the current law allows them to escape from the responsibility as long as they inform customers that they are not the party managing the transaction.”

“The country needs a separate law to regulate such exaggerated or misleading advertisements," the spokesperson added. "The Fair Trade Commission is currently reviewing a revision of the consumer protection law so that live commerce platforms have to take heavier responsibility.”

Independent lawmaker Yang Jung-suk recently proposed a revision of the law requiring live commerce businesses to preserve the videos of full shows and offer those to consumers upon request. It aims to help consumers use the videos as evidence to prove damages.

“It is true that minimal regulation is essential to remove confusion of consumers,” said Lee Kyoung-jun, business professor at Kyung Hee University. “But the nature of live commerce is e-commerce, not broadcast.”

“There shouldn't be any restriction on the process of buying and selling products or services."

FTC cracks down on exaggerated marketing claims related to Covid-19