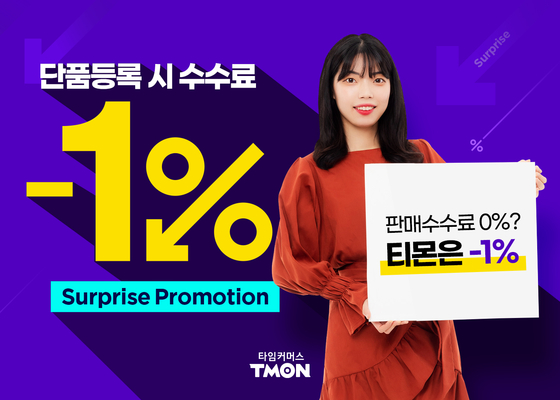 An image promoting the minus 1-percent commissions offered to certain sellers on TMON. [TMON]


TMON will be offering “negative commissions” to some sellers, giving them money rather than charging them a fee when sales are made on its open market platform.

The e-commerce operator said on Monday that starting April 1 it will offer minus 1-percent commissions to vendors offering only a single version of a product for sale rather than multiple versions.

TMON will continue to charge the same fees to sellers selling multiple versions of a product and time commerce sellers – the primary sales channel for TMON.

Time commerce is selling certain products at a cheap price during a certain period of time.

The reason behind the decision is to raise the reputation of the company, which is preparing to go public in the second half.

“One of the core problems in the open market system is that a seller hooks customers by showing the lowest price product, but once consumers click in, they find out that seller asks for a higher price for the same product if it has a different color or an option,” said Choi Yang-hwan, a spokesperson for TMON. “That makes consumers feel like they have been conned. The purpose of the minus commission rate is to prevent such a feeling.”

“The core value and the reason behind TMON’s existence is the satisfaction of consumers and partners,” Lee Jin-won, TMON CEO, said in a statement. The company “will continue to innovate service to share benefit with customers and partners.”

Over recent months, retailers have been rolling out new strategies with the goal to attract more sellers.

Last week, Emart’s SSG.com announced plans to introduce an open-market service starting next month to expand the range of products available. The limited range has been a chief complaint of customers.

Coupang last year started a service that manages products of individual sellers from storage to packing to delivery, which allows customers to receive the products the next day.

The competition to secure more sellers on open markets is expected to grow in the retail industry with the sale of eBay Korea, an operator of Gmarket and Auction.

Shinseage Group and Lotte Group took part in the preliminary bidding that took place earlier this month for the third-largest e-commerce operator in Korea, according to local media reports.