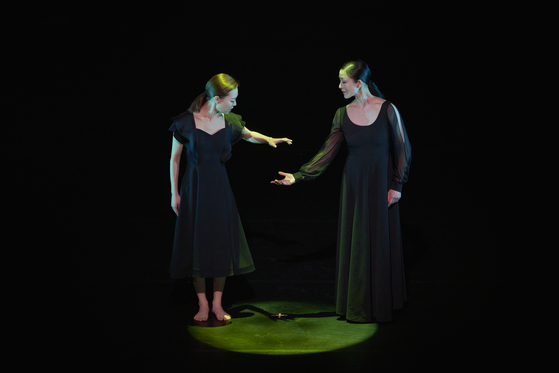 
TONGYEONG, South Gyeongsang – The reflection of last weekend’s full moon illuminated brighter than usual on the southern coastal seas of Tongyeong in South Gyeongsang on Sunday night, “a perfect scene to feel the reverberation of that beautiful performance about the moon that just ended,” said Song Jeong-mi. The 58-year-old found herself gazing at the full moon above the ocean after the “Dear Luna” dance drama that was performed on Sunday evening at the Black Box Theater adjoining the Tongyeong Concert Hall.

The classical music event was established in 2002 to pay tribute to Korea’s highly respected composer Isang Yun (1917-95). The southern coastal city of Tongyeong was the composer’s hometown, though he lived in Germany for many years to study music.

Ballerina Kim decided to stage “Dear Luna,” in which she directs and performs, for the first time during the TIMF. The dance drama, according to Kim, is about the cycle of the moon, from full to eclipse. Its main theme is “dream” and through Kim and Han’s dance, and the classical music that has been carefully selected by the work’s music director Texu Kim, the whole performance attempts to talk about “the path to fulfill one’s dream” and “life,” said ballerina Kim, ahead of the premiere on Friday.

Kim, a former principal dancer of the Korean National Ballet, has been actively staging solo and collaborative performances after leaving the state-run ballet company. This time, as the artistic director of “Dear Luna,” she had to cast her partner musicians and the music director, which she said was a “huge burden on her shoulders.” But the ballerina says she knew exactly who she wanted.

Even before actor Han garnered media attention from her role in Golden Globe-winning film “Minari,” Kim called her. Han, who has been “dancing since she was 28-months-old,” majored in Korean traditional dance at the Korea National University of Arts and has performed in several dance dramas such as “A girl who went into the Picture” (2017).

Kim said Han caught her attention after she watched videos of her performances on YouTube.

“She’s a dancer any choreographer would be eager to work with,” Kim told the JoongAng Ilbo, an affiliate of the Korea JoongAng Daily in their rehearsal room early this month. “I was quite worried after the success of ‘Minari’ that she would be too busy to come in for rehearsals but she’s been coming in more than she was supposed to.”

Kim and Han’s performance as a duo expressing the moon, captivated the audience in the sold-out auditorium, many of whom were surprised to find out that Han is a dancer.

The highlight of the performance was Kim’s solo, expressing the second full moon. After going through the whole cycle, the moon gradually shapes into a full circle as Kim dances alone under a spot light. In the background pianist William Youn played Debussy’s “Clair de Lune.”

With three performances from Friday, “Dear Luna” successfully kicked off this year’s TIMF that presents 23 classical concerts and performances under the theme “Changing Reality.” Although happy to be able to hold the festival after last year's was canceled due to the coronavirus, this year’s event has kept the organizers on their toes. 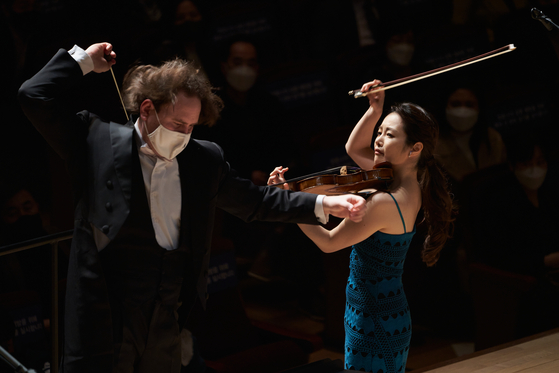 
On Friday at the Tongyeong Concert Hall, the Tongyeong Festival Orchestra was scheduled to play "Fanfare and Memorial" composed by Isang Yun and "Symphony No. 5" by Dmitri Shostakovich, under the baton of Venezuelan conductor Christian Vasquez. The original pianist that was to accompany the orchestra could not come to Korea after testing positive for Covid-19 and was replaced by violinist Kim Bomsori, who performed Tchaikovsky's "Violin Concerto."

The Busan Philharmonic Orchestra’s concert had to be canceled after failing to reach an agreement regarding social distancing guidelines with the organizer. The TIMF is enforcing a rule that all audience members sit one seat apart from each other.

Violinist Chung Kyung-wha also had to cancel her performances after injuring her right finger.

Despite a shaky start, classical music aficionados did not seem to mind the cancelations or changes.

“I’m just pleased that the festival could be held this year amid the pandemic,” said Lee Cho-rong, a Busan resident who visits the TIMF almost every year with her violinist daughter. “We were quite happy to see violinist Kim Bomsori’s performance although we feel sorry for the original pianist who couldn’t make it to Korea. I heard other European countries are still under lockdown and it’s impossible to hold such music festivals. I think we are blessed.”

More interesting programs are to continue for over the course of the festival including alternative pop band Leenalchi’s concert on April 2. The festival will close with a concert by the Tongyeong Festival Orchestra on April 4, accompanied by Korean soprano Im Sun-hae and Russian tenor Pavel Kolgatin under the baton of Austrian maestro Sascha Goetzel.

More information on TIMF is available on its official website, www.timf.org.

[WORD_ON_THE_WEB] 'They knew what they were getting into'