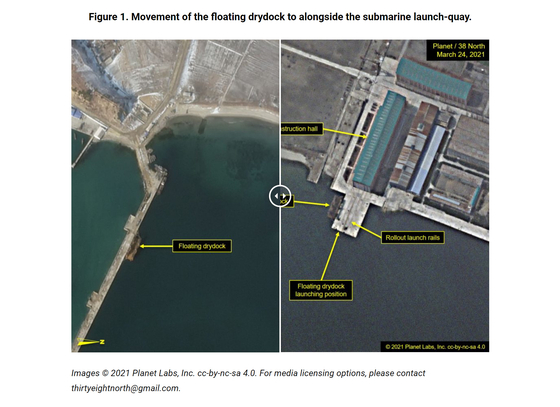 An interactive satellite imagery comparison by 38 North shows that a floating drydock in Sinpo, North Korea, was moved from its Feb. 10 location to a new location by a pier equipped with submarine rollout launch rails. [YONHAP]

The images, taken on March 24 and first reported by U.S.-based North Korea analysis group 38 North, showed that a floating drydock normally moored at a pier at Sinpo Shipyard in North Korea has been moved from its Feb. 10 location to a wharf equipped with submarine rollout launch rails next to a construction hall.

U.S. intelligence authorities captured images of a submarine-launched ballistic missile (SLBM) under development at Sinpo Shipyard in September. SLBMs have appeared regularly at the North’s military parades, the last being the Pukguksong-5 which Pyongyang unveiled in January.

Although the precise date of the drydock’s movement is unclear, its repositioning comes around the same time as a flurry of missile launches by the secretive regime.

The North launched two cruise missiles from the port of Onchon, South Pyongan Province, into the Yellow Sea on March 21 in the first known weapons tests since the start of the U.S. Joe Biden administration.

The North then fired two short-range ballistic missiles into the eastern waters off the Korean Peninsula from Hamju, South Hamkyong Province, on Thursday morning just hours after Washington warned Pyongyang against any provocations that could destabilize the peninsula.

While Biden quoted U.S. defense officials in calling the cruise missile launches “business as usual” on Tuesday, the U.S. president warned Thursday after the ballistic missile tests that Washington would “respond accordingly” if Pyongyang chooses to escalate tensions.

While cruise missile tests do not breach United Nations Security Council sanctions, ballistic missile tests are banned because they are designed to carry nuclear weapons and have a longer range and higher speed than cruise missiles of the same size.

In response to Biden’s warning, the North criticized the United States for what it perceives as infringements of its sovereignty.

“The U.S. president’s comments are a provocation and encroachment on our country’s right to self-defense,” said Ri Pyong-chol, the vice chairman of the North's Central Military Commission, in a statement Saturday.

“If the United States continues with its thoughtless remarks without thinking of the consequences, it may be faced with something not good.”

Speaking to the Center for Strategic and International Studies, a foreign policy think tank based in Washington, D.C., former U.S. national security policy advisor Victor Cha said that North Korea could be escalating missile tests and raising the specter of more launches to strengthen its negotiating position vis-à-vis the United States.

“These weapons demonstrations were carried out against the backdrop of Pyongyang rejecting reported U.S. overtures early in the Biden administration for dialogue,” Cha said.

“This suggests North Korea is using weapons demonstrations to build leverage and as a pressure tactic to force unilateral concessions from the United States for a return to the negotiating table.”