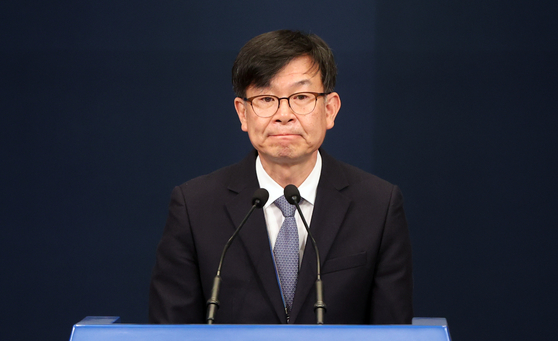 “I offer an apology for having disappointed the people at this critical moment of the government’s war against real estate speculation,” Kim, who oversaw economic and social policies since June 2019, said Monday. “I believe it is my last responsibility to step down quickly for the government to push forward its real estate policy without disturbance.”

Since Sunday, Kim has been confronted with media reports that he made a big hike in the rent of an apartment he owns just two days before new rent control laws took effect.

The next day, the ruling Democratic Party (DP) used its majority to railroad three controversial bills through the National Assembly to protect tenants by restricting landlords’ rights. The administration approved the new laws at an emergency cabinet meeting the next day. The new laws took effect immediately, on July 31, 2020.

According to the new laws, tenants were guaranteed renewal of rent contracts for two years after existing two-year leases ended. A 5-percent cap on rent increases and a mandatory reporting of rental rates to the government were also made law. The new rent control laws covered all kinds of rental contracts including jeonse.

After the government gazette released details on Kim’s assets last Thursday, the media started investigating. By Sunday, reports pointed out that Kim had raised the rent by 14 percent – far larger than the 5-percent ceiling – by renewing the contract just two days before the new laws took effect. The Blue House initially tried to defend Kim, but that backfired.

“The jeonse deposit for the Seongdong District apartment that Kim is currently living in was raised, so he had to increase the rent from his tenant to match the amount,” a senior presidential aide said Sunday.

Kim paid a 500 million won jeonse deposit for the Seongdong District apartment in December 2019. Last July, his landlord raised the amount by 50 million won or 10 percent.

The Blue House's explanation was not convincing: Kim’s landlord increased his deposit by 50 million won, but Kim demanded 120 million won more from his tenant. Kim and his family had more than enough cash to pay the increase in the deposit. According to the asset report released last week, Kim had over 904 million won in savings in the bank and his wife had over 444 million won.

It's unclear when the Blue House became aware that Kim increased the deposit by 14.1 percent on the eve of its rent control laws going into effect. He reported changes in his assets to the Ministry of Personnel Management last month.

Moon named Kim as chairman of the Fair Trade Commission in May 2017. Kim was named policy chief of the Blue House in June 2019. Known as the “chaebol sniper” for his antipathy to big business, Kim was an economics professor at Hansung University and a key member of the People’s Solidarity for Participatory Democracy before joining the Moon administration.

After firing his policy czar in the morning, Moon hosted an anti-corruption meeting with top officials at the Blue House in the afternoon. The administration is conducting a massive investigation into suspicious land purchases by government and public corporation employees using inside information. 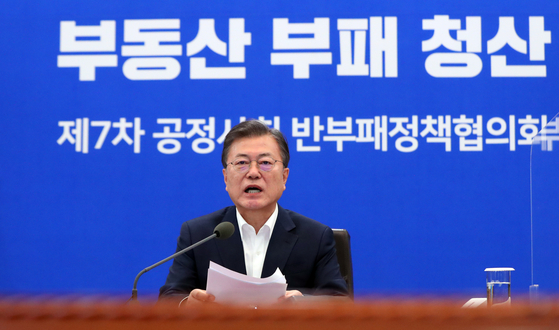 President Moon Jae-in speaks at the anti-corruption policy meeting at the Blue House on Monday. [YONHAP]

“Real estate speculation by civil servants and public company workers destroyed the people’s humble dreams of purchasing their homes and having an equal opportunity,” Moon said. “We must sternly and thoroughly investigate the current scandal and resolve the structural problem of real estate market corruption.”

Moon said he plans to establish a new watchdog agency to end unfair transactions in the real estate market. He also urged the National Assembly to pass a law to prevent conflict of interest among public servants.

In the opening remarks, Moon did not make any particular mention about his sacking of Kim.

Makeshift measures are no solution