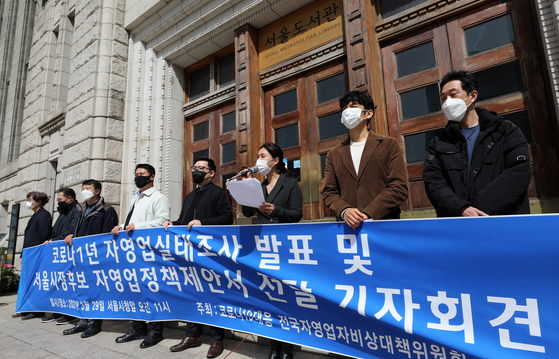 Representatives of owners of small businesses nationwide present the results of their association's survey in front of Seoul Metropolitan Library on Monday. [NEWS1]

The survey was conducted by the Covid-19 Emergency Committee for Small Business Owners between Feb. 5 and March 25, relying on self-reported mobile phone responses from 1,545 independent business owners across the country.

The group presented their results at a press conference targeting the mayoral candidates in front of the Seoul Metropolitan Library, next to City Hall. Highlighting the survey responses, they urged that the next Seoul mayor craft a relief policy for small businesses.

Of the respondents, 95.6 percent, or 1,477 business owners, reported a decline in sales since the pandemic took hold in January, with revenue declining by 53.1 percent on average. Seventy-three percent of business owners reported at least a 30 percent decline in revenue or more.

Business owners in the Seoul metropolitan area reported a more pronounced decline in revenue than those outside, with small businesses in the capital region suffering an average revenue drop of 59.2 percent compared to an average 43.7 percent decline in sales for businesses in other regions.

Of the respondents, 89.8 percent, or 1,387 people, said that disease control policies restricting gathering sizes and service hours had affected their businesses.

Debt rose for 81.4 percent of the respondents, with the average increase in debt hovering at 51 million won ($450,000). The average number of employees on their payrolls declined from 4 before the pandemic to 2.1 after.

The association argued that government relief for businesses was urgently needed, saying that should the pandemic continue for a year, over half of small businesses would find it difficult to survive.

“Compensation [for small business owners] must be organized within the means of the country’s finances,” the association said. “We also ask that mayoral candidates in the upcoming by-election speedily create new social distancing measures and support a disease control campaign premised on individual freedom and responsibility.”

The group said they submitted the survey to candidates in the Seoul mayoral by-election as part of the association’s policy proposal.

Mood worsens for businesses as distancing takes its toll