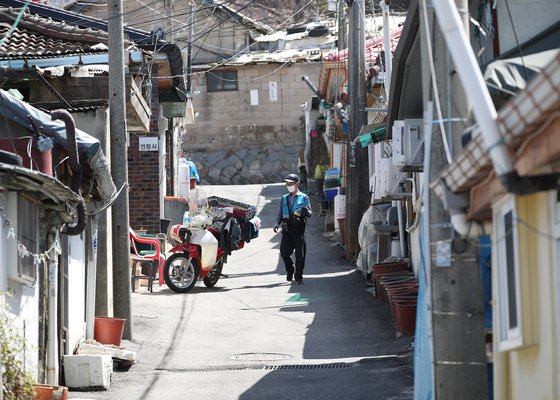 A neighborhood in Nowon district, Seoul, on March 30. The area was one of the 16 that the government has approved on a redevelopment project led by public developers LH and SH, which will fast track the process. [NEWS1]


In the midst of a major land scandal, the government has approved 16 areas in Seoul for redevelopment.

The projects will be led by Seoul Housing & Communities Corp. (SH) and Land and Housing Corp. (LH), the state-owned company at center of the insider trading storm that has led to investigations, suicides and the resignation of the land minister.

According to the Ministry of Land, Infrastructure and Transport and the Seoul Metropolitan Government on Tuesday, the 16 areas were selected from the 28 proposed by district offices in Seoul.

The areas include Nowon, Seongbuk, Seongdong, Dongdaemun north of the Han River and Songpa, Gangdong and Yeongdeunpo south of the river.

The government said the areas that have been selected are close to major subway stations and more than 50,000 square meters in size.

It estimates that once redevelopment is completed roughly 20,000 housing units will be added.

LH and SH will speed up the process and get the approvals for raising the floor area ratio to the maximum of 120 percent, which will allow for the construction of higher apartments.

In exchange, 20 percent of the units will be government leased and provided to vulnerable people, including low-income tenants, young people who are just starting out and newlyweds.

The latest is the second batch of public-developer led redevelopments. In the first batch, eight areas including Dongjak, Gangbuk, Yeongdeungpo and Gwanak were named.

Public developer-led redevelopment is a real estate measure announced by the government in May 2020. It is part of a plan to stabilize the overheated real estate market by increasing housing supply.

Despite restrictive real estate measures rolled out since the beginning of the Moon Jae-in administration in 2017, housing prices have continued to surge on rising demand, especially from young people.

By including the public developers in spearheading the redevelopment projects, the government has raised the required supply of government-leased apartments from previous 15 percent of all housing units built to a minimum 20 percent.

Finance Minister Hong Nam-ki stressed that despite the recent scandal centering on LH, the government will continue to push ahead with its housing supply plan in order to stabilize the real estate market.

On Monday, the government released measures to prevent illegal real estate investment by introducing a fine that is three to five times the profits earned through real estate investment using illegal means, including insider information, market manipulation and falsifying documents. The perpetrator could even face jail time depending on the level of the offense.

All public employees must report their real estate holdings, and employees of public developers including LH and SH will be required to submit documents detailing the source of funds for purchasing real estate.